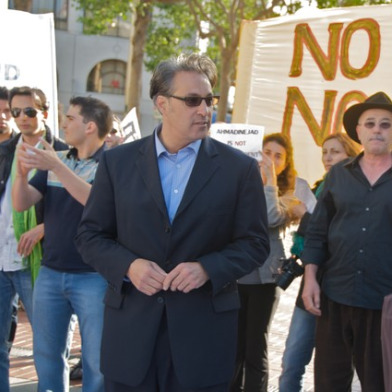 The San Francisco Ethics Commission upheld the official misconduct charges against suspended Sheriff Ross Mirkarimi, with four of the five commissioners saying his crime and conviction alone were enough reason to validate the charge.

However, in their recommendation to the Board of Supervisors, which is non-binding, the commission unanimously rejected allegations by the city attorney’s office that Mirkarimi dissuaded witnesses or abused the power of his office.

The commission demurred on recommending whether the board should permanently remove Mirkarimi from office based on the narrowed charge.

The Board of Supervisors has the ultimate say on whether Mirkarimi will be ousted and would need the approval of nine of the 11 supervisors.

After the hearing, Mirkarimi said, “I don’t agree with the final outcome,” which he said was, “something we stipulated to many, many months ago.”

If the mayor had not added the additional allegations, he said, “We could have been sparing the city this kind of torture.”

Mayor Ed Lee suspended Mirkarimi without pay in March following his guilty plea to a false imprisonment charge in connection with a Dec. 31 incident in which he grabbed and bruised the arm of his wife, Eliana Lopez, during an argument.

Commission chair Benedict Hur said it was “beyond dispute” that a crime and conviction occurred and said he found it “disturbing” that Mirkarimi “sought to minimize the severity of that conduct” in his testimony to the commission back in June.

However, Hur said the charges should not necessarily be considered official misconduct because there should be “a direct nexus between wrongful conduct and the duties” of the sheriff.

The other four commissioners disagreed, saying there was indeed a connection between Mirkarimi’s conviction and his duties as sheriff and that the official misconduct charge should be sustained.

“The sheriff is the head of a law enforcement agency,” Commissioner Beverly Hayon said. “It should be someone we can all emulate.”

In his closing argument earlier today, Deputy City Attorney Peter Keith, who is representing the mayor, made a similar argument, saying Mirkarimi’s conviction put the sheriff’s department in “an intolerable situation.”

Mirkarimi’s attorney, David Waggoner, argued though that the sheriff’s charges were far less serious than the two previous elected officials suspended on a similar charge–Public Defender Frank Egan, who was indicted for murder and Supervisor Ed Jew, who remains imprisoned for extortion and perjury.

“The facts could not be more different,” Waggoner said.

Mirkarimi attended today’s hearing with Lopez, who testified in support of her husband in front of the commission last month but had spent most of the last several months in her native Venezuela with the couple’s young son.

During a break in the proceedings earlier today, Mirkarimi became emotional while describing being back together with his wife and son. A restraining order imposed by the court had prevented him from interaction with Lopez but was lifted last month.

“The process was cruel that kept us apart for seven months,” he said while fighting back tears.

He said his suspension “demonstrates the grave injustice to the voters’ will.”

During the public comment portion of today’s meeting, a majority of the dozens of speakers called for Mirkarimi to be reinstated, including his own mother, Nancy Kolman Ventrone, who traveled from Rhode Island to attend the hearing.

Many supporters of Mirkarimi, including neighborhood activist Katherine Howard, called the case “a political witch hunt.”

However, opponents of the sheriff also spoke, including Beverly Upton, the executive director of the San Francisco Domestic Violence Consortium, a coalition of domestic violence victim advocate groups.

“He cannot be the supervisor of one of the world’s best violence prevention programs,” Upton said. “He has lost the confidence of San Francisco … and tarnishes the badge of people trying to do good work.”

Both sides also held dueling rallies outside City Hall around noontime during the public comment period.

The commission agreed to return at an as-yet-unspecified date in early September to draft the written recommendation to the board.