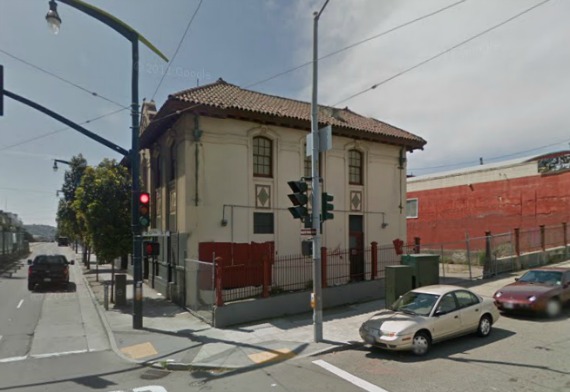 San Francisco’s gusto for issuing tickets and citations is well-known to anyone too slow to move a vehicle. And turns out the city is also more than willing to cite… itself.

Tacked to the empty former police station at Third and 20th streets is a notice of violation, according to the Dogpatch Howler. For failing to comply with the city’s vacant building ordinance, the Department of Real Estate was dinged for $765 — plus a nine times penalty, for a total of over $7,000 — by the Department of Building Inspection.

The old Potrero police station was “enthusiastically” abandoned by SFPD in the 1990s. It stood vacant for 15 years before a fire broke out there in May, according to reports.

Since the fire, the property was declared a nuisance by the Planning Department. The Department of Building Inspection, which inspects structures for code compliance, then attempted to contact Real Estate, which handles all surplus city properties not occupied by another agency.

DBI wanted DRE to follow a recently-passed law authored by Board President David Chiu, which requires owners of vacant buildings to pay a fee and enter into a registration database — all of which was required of DRE before the fire, according to William Strawn, a spokesman for Building Inspection. That, apparently, was not done, so DBI slapped DRE with the requisite citation and fee.

In emails obtained by The Appeal, John Updike, Real Estate’s acting director, objected to being slapped with a fine by another city department and asked for relief — that is, to not have to pay the fine. But DBI stood firm.

“The Building Inspector… who investigated this complaint was not contacted and and no permit to repair the damage was obtained per the instructions of the Notice of Violation,” DBI’s Edward Sweeney wrote to Updike on Aug. 22.

DBI was enjoined by “neigbor’s [sic], business owner’s [sic] and the District Supervisor” to “be aggressive in enforcing the ordinance as outlined above. I am not able at this time to give relief from any of the Notices of Violations issued to 2300 23rd Street.”

The police station will someday be declared “surplus,” which means the city will be able to lease it or sell it, according to Updike, reached Thursday via email. The Board of Supervisors might be able to OK a request for contracts in October. But until then, there’s no money to fix the police station up, Updike said.

“Getting to a point of impasse where a fine is due is very rare,” Updike said via email.

So what happens when the city fines itself? Most likely, Real Estate “would simply send a credit to DBI’s operating fund,” according to Strawn. In other words, they’re not off the hook.

“It’s an unusual circumstance for a city department not to be in compliance with a city ordinance,” Strawn said. “We can only hope they [Real Estate] are in the process of responding. Maybe they have a bigger bureacracy to wade through.”

There are 450 vacant buildings in the city’s database, according to Strawn. About half are owned by banks or other financial institutions, he said.