People love Amanda Palmer. They love her so much that they gave her over $1 million dollars in donations to finish her new album.

The Dresden Dolls singer is known for her social media skills, but after being the first musician to hit the million-dollar mark through Kickstater.com, she may have hit a new high. Her goal was to raise $100,000 to promote her upcoming solo album, but she got a lot more than she bargained for and celebrated last Thursday with a “VIP throw-down” at Public Works.

The event was held for those who donated $300 or more to her campaign, and according tothe page, there were 67 people who donated enough cash to come out to Thursday’s pop-up art show (there were also shindigs in Berlin, London, Brooklyn, Los Angeles and Boston).

The night started out an art show and ended a floor stomping, hand-clapping, full on sing-a-long. Over thirty of Palmer’s artist friends made paintings, posters, photos and more inspired by her tunes. Pieces by Shepard Fairey, Michael Pope and Palmer herself hung in a side room while people drank and waited for the music to begin.

If you’re going to drop $300 for a night out, you’re probably going to do it in style. Palmer is known for her love of visual art, and she often wears it in the fashion of a kimono, bare feet, and even a keytar strapped to her back. A good portion of her fans followed suit and busted out the full steampunk gear: top hats, corsets and contraptions, and goggles galore.

It was about as intimate as being in room full of strangers can be. The space itself wasn’t very packed, but in the beginning of the night she came on stage to welcome everyone and broke down crying. Her good friend was taken to the hospital that day, and as she expressed how happy she was to be with everyone in that dimly lit room, tears flowed. 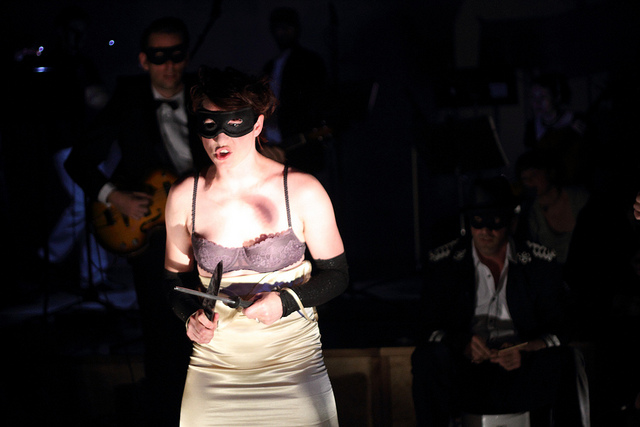 German funny-duo Die Roten Punkte played a few acoustic songs, err comedy routines and lightened up the mood. But as the Grand Theft Orchestra serenaded us with a five piece of strings, a Zorro-masked Palmer came in and thickened the tone again. Armed with a siren-spewing megaphone, her and the rest of the band barged in and cleared a space in the middle of the floor.

They came prepared with props and makeshift instruments. Who knew that loudly sharpening a knife would add such affect to emotionally violent lyrics? Or that a saw could be played with a violin bow? All the lights in the room were turned off, most people were sitting on the floor, and a few were given flashlights to help illuminate the hour set of originals like “The Bed Song” a gentle cover of Nirvana’s “Polly,” and even husband/Sandman comic-writer Neil Gaiman came out and sang a tune (he also announced he’ll be writing another installation of the series).

Palmer’s already been dubbed a social media queen, but her crowd-sourcing efforts have taken her grass roots popularity to a new level. Her campaign had over 25,000 donors and is a prime example of artists taking the power back from a monstrous industry. The money allowed her complete control over her record, art-show tour, and production, leaving her to be as weird as she wants to be.