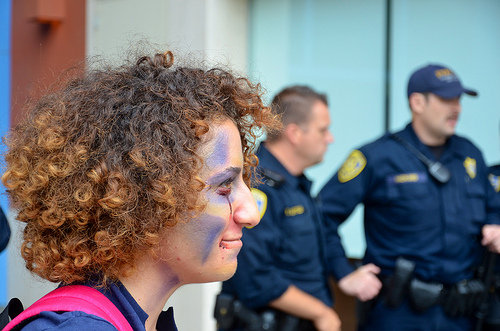 5:03 PM: The University of California Regents today voted to endorse the governor’s tax plan, and contingent on its passing, to freeze next year’s undergraduate tuition costs, as well as put into place fee increases for professional programs system-wide.

Today’s meeting, held at the University of California at San Francisco Mission Bay campus, began around 8:30 a.m. and continued past 5 p.m.

The board, in a 25-1 vote, endorsed Gov. Brown’s tax proposal and supported a one-year tuition freeze if the tax measure, Proposition 30, passes in November.

If the ballot measure passes on Nov. 6, the UC system will receive $125 million in funding from the state, enabling it to stave off tuition increases. If it fails, the board could vote to increase tuition for undergrads by more than 20 percent to cover a mid-year $250 million shortfall.

According to the UC, each student would face a mid-year tuition increase of up to $2,400.

The board also voted to increase fees for as many as 57 professional programs at UC campuses in a 24-2 vote.

Protesters dressed as zombies this morning interrupted the start of today’s session, and even broke out singing and dancing to Michael Jackson’s 1982 hit “Thriller.”

The group of students, UC workers and community members urged the Regents to endorse the governor’s tax initiative to ensure a tuition freeze for undergraduates next year and pull back from any fee hikes for professional students in programs that include business and nursing.

2:17 PM: With budget problems looming for the state’s higher education system, the University of California Board of Regents is meeting today as part of a two-day summer session that will include a vote on a possible tuition freeze for undergraduate students.

The board is expected to endorse Gov. Brown’s tax proposal and to vote on the tuition freeze–which is contingent on the tax measure’s passage–as well as a proposal to increase fees for as many as 57 professional programs at UC campuses.

Today’s meeting, held at the University of California at San Francisco Mission Bay campus, began around 8:30 a.m. with public comment.

After the public comment period ended an hour later, dozens of students, campus workers and supporters dressed as “zombies” brought the meeting to a brief halt as they chanted, cheered, clapped, booed and hissed, and called on the regents not to approve any fee hikes.

During a “mic check,” in which the group of protesters repeated the words of one of its members, the crowd said, “We reject the de-funding of public education in California.”

They then broke out into the “Thriller” dance, with Michael Jackson’s 1982 song blaring from a boom box.

As the Regents called for order, UCSF police assembled, announcing that they were ready to make arrests or use force to control the crowd.

The zombie crowd eventually dispersed, chanting, “No cuts, no fees; education should be free,” and the board went into a brief closed session.

Andrea Barrera, a fourth-year student at UC Berkeley, said outside the meeting that she doesn’t think the struggle to keep fee increases at bay is ever going to end.

Around 10 a.m., the board’s open session resumed with a statement from Claudia Magana, a recent graduate of UC Santa Cruz who has served as UC Student Association president for the past two years.

“Every year we’ve fought to stop the fee increases,” she said.

She said the fact that Brown’s tax initiative made it to the ballot is a victory but said, “we haven’t won yet.”

“We need you to support this initiative,” she told the board.

If the ballot measure passes, the UC system will receive $125 million in funding from the state, enabling it to stave off tuition increases. If it fails, the board could vote to increase tuition for undergrads by more than 20 percent to cover a mid-year $250 million shortfall.

Ali Oligny, a fourth-year English major at UC Berkeley who transferred from a community college in Southern California, said today’s demonstration is a way to show the Regents that students are not standing idly by, but are showing “visibility about student fee hikes.”