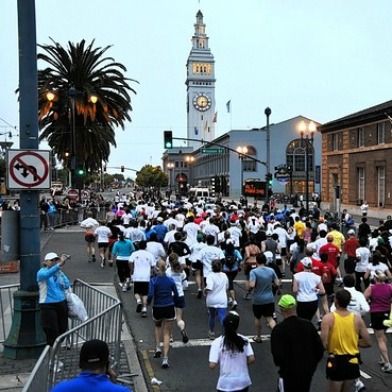 Tens of thousands are expected to hit the steep, yet scenic, San Francisco streets this Sunday for the San Francisco Marathon, a tradition since the 1970s.

With an early start time of 5:30 a.m. for the first wave of the more than 24,000 registered participants taking on the 26.2-mile circular course, the runners will begin at Mission Street and the Embarcadero and make their way through Fisherman’s Wharf before crossing the iconic Golden Gate Bridge.

Part of the foot race will cross into Marin County before heading back into the city along the Pacific Ocean coastline, leading back eastward into the famous Haight-Ashbury neighborhood. The race then winds down past the Giants AT&T Park stadium and ends at Cupid’s Arrow on the southern end of the Embarcadero at Folsom Street.

Other participants will lace up their sneakers for two half-marathon courses, a 5K race, and the third annual “Munchkin Kids Run.”

The youth run will benefit the San Francisco Child Abuse Prevention Center and includes a mile, ?? mile or 100 yard dash along the Embarcadero.

For those that consider 26.2 miles a walk in the park, an ultramarathon is set to begin on race day at midnight, covering 52.4 miles. The select group of runners is required to raise $1,500 to register for the course that loops through the city twice.

Race officials said the course was designed to minimize road disruptions, however, traffic and public transportation on the Golden Gate Bridge and other parts of the city will be affected by the influx of runners.

Even with racers crossing the Golden Gate Bridge the span will remain open to traffic with delays expected until about 10 a.m., bridge officials said.

Lane modifications will create space for thousands of runners while allowing drivers to cross the bridge. Parking lots near the bridge will be closed.

Pedestrians hoping to cross the bridge are advised not to trek across until after 10 a.m., bridge officials said.

Road closures leading up to the San Francisco end of the bridge in the Presidio and Crissy Field area will also impact traffic.

Street closures in the Embarcadero, Presidio, Outer Richmond, Golden Gate Park, the Haight-Ashbury and Mission neighborhoods between midnight and noon will affect traffic and bus routes, according to the San Francisco Municipal Transportation Agency.