SF General Seeking Identity Of Man Who Fell From Overpass 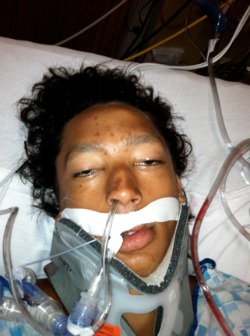 Hospital officials in San Francisco are asking for the public’s help in identifying a patient in critical condition who fell from an overpass in the city’s Bayview neighborhood over the weekend.

A Hispanic man in his late teens to early 20s fell from an Interstate Highway 280 overpass on Saturday, and was admitted to San Francisco General Hospital at 1:30 p.m.

The man was found on the ground near the Cesar Chavez off-ramp from Highway 280 with severe injuries and no identification, hospital officials said.

He remains unconscious and his injuries are considered life threatening.

The man has dark brown, wavy hair and brown eyes, stands around 5 feet 4 inches tall and weighs around 145 pounds. He was wearing a black T-shirt and light colored shorts.

Anyone who might have information about the victim is asjed to contact San Francisco General Hospital at (415) 206-8063,