Poolside began in Los Feliz pool house turned studio on a sunny afternoon a year and a half ago. Since then, this product of a few swigs of mescal has had a hit debut record and embarked on a world tour. The duo never really saw success coming, but that’s the laidback beauty of it.

SF local Jeffrey Paradise (The Calculators, who later evolved into the The Rapture, and a mind behind Blow Up) and Filip Nikolic (Ima Robot) dropped their debut album Pacific Standard Time earlier this month, picking up some crucial attention and creating their own genre along the way.

Daytime disco, as they call it, is their signature blend of slightly stoned summer time jams, literally made by and for warm poolside days. It began as tunes for them and their friends, but now the entire globe is taking a dip.

Not fans of the “champagne bottle service” daytime party scene, their tunes surfaced as a chilled out, natural alternative to harsh energy most electronic music radiates. It’s so natural in fact, that only one song they’ve ever written didn’t make the album. Jeffrey gave us a call to talk about the group’s upcoming tour, the new record, red wine, and how it all seemed to come so easy.

But hey, it’s summertime. That’s how the living should be.

You guys have said before didn’t want to play shows after the sun went down, what changed that?

Well, we kind of didn’t expect there to be a real demand, I guess you might say, for us to play in a real venue setting. At first we thought we just might play our friends’ events. We’ve both been involved with music for a long time, but we just figured we’d link in with them and play some day parties, pool parties, and side parties at festivals.

Our world was pretty small at that time, so we didn’t want to play any night clubs or bars, but shortly after releasing “Do You Believe” we started getting a lot more attention than what we were expecting. So we have to admit, we totally changed are tune on that one. On the other hand, we didn’t expect these opportunities to come to us.

Is it harder to get the vibes across in a club rather than outdoors?

I wouldn’t say it’s harder, but we feel like we’ve played a bunch of really cool settings. Like Pacific Fest last year was right by a lake, we played a big pool party in Guadalajara recently that had this really big Grecian pool, so I would say that the music fits the setting a lot better when you play in a really awesome day time setting.

But I wouldn’t say it’s harder for us or the audience to feel it. Ya’ know, drinking a tropical drink is awesome in Hawaii by the beach, but having one in your kitchen is pretty cool too. So it’s not totally reliant on the setting, but it is a lot better if you have a really awesome one.

On the tour, are you guys going to be DJing or is it a live show?

We have a four piece live band. Me, Filip, and two other guys and we’ll probably be DJing after parties. Almost all the parts we’ll be doing live.

Filip plays bass and sings, I’m controlling the electric stuff – doing synths and a lot of the effects – and we have another keyboardist who is a really good traditional pianist, and he does all of the more complicated electronic stuff that we have programmed. And then we have a drummer, a proper drummer with a full kit. We did a couple shows with bongos and cowbells, but we decided to move over to a full drummer.

Any pre-studio rituals to get in that Poolside zone?

I wouldn’t say we have any rituals, but we tend to drink a lot of mescal when we write music. It keeps it pretty loose, and keeps us working in a fun way where we don’t get bogged down on if each sound is exactly perfect. A lot of times you get stuck, but when we’re kind of drunk making songs were like “alright, this is cool!”

We’re not hammered every day in the studio, but we just kind of chill, get a little drunk, make some songs, listen to them in the pool to make sure they fit the vibe. So if we’re like “ooh, that sounds a little bit too tense,” we can go back and change it.

But usually we have it down so it just kind of fits. You know how some DJs have that thing where they go to a club and test out their songs and see if they are banging enough or whatever? We just of just go in the pool and throw on our songs. I wouldn’t say it’s a ritual, just a little thing we do.

Sounds like mescal is the official Poolside drink then.

We both have really weird taste in red wines, so we drink a lot of red wine, and mescal, and I wouldn’t say we’re too discriminating about “don’t drink anything else.” We both have really unique tastes in food and booze, we both like earthy red wines Also, mescal, it’s not hard to find, but it’s not easy to find either. They just happen to have it by this liquor store by our studio so it was a matter of convenience as well.

It seems like the whole project has been really laidback. Do you guys have future plans for Poolside or are you just taking it as it comes?

Definitely taking it day by day. It seems to almost change every day, it’s getting kind of crazy. Like we never said we were going to play at night, and we changed. We do plan to make a second album. And for that we’re going to go away to somewhere coastal, not really Los Angeles beach scene, but maybe more central California. Go away for two months, start with silence, and leave with a completed album. That’s a future plan we’re going to keep.

And our upcoming tour with Twin Shadow. We have another U.S. tour in October, and then we’re touring Europe in November, and South America in December. And then at some point in 2013 we’re going to make a second album, and those are the only things we’re really thinking about.

We’re being really aware of enjoying the process, and not doing things just because it’s a good look. We’ve basically turned down a lot of stuff, really at the end of the day we want this project to be something we enjoy doing, and not a job you don’t like. Obviously there is some not so fun stuff, but we keep it to a minimum.

Do expect to see other artists jumping in the daytime disco genre?

We don’t have any idea! It seems like there is more of that vibe that we were missing from the pool party scene in L.A. and what we created this music for. But I don’t if they would consider themselves daytime disco or anything like that. I hope so, it would be cool.

The album is $10 on iTunes and $5 on your website, what’s the strategy behind that?

We really just wanted to be cool to our fans. We have a bit of a Fugazi approach to the band as in we do it because we love it. It’s just respect for the fans, not trying nickel and dime people, I’m not even sure how to verbalize it exactly.

We want people who like us to be into the whole package basically. We just started as a couple of good friends making music, and if we want to do this professionally, we want to have a group of fans who we can really relate to.

Poolside’s tour begins July 26 in New York, they’ll be playing the Great American Music Hall August 16 and 17, but you can see Jeffrey spin at Blow Up this weekend.

An update on the award winning club series Blow Up, from the man himself:

-There is a reunion party this Saturday at the Rickshaw Stop where Jeffrey will be spinning. Expect hits from 2005-2006, “the classic Blow Up sound.”

-As for the future of Blow Up, there will be another party in August with a live performance by Midnight Magic. In September, they’ll be co-promoting a Bag Raiders DJ set, and after that comes the Poolside tours and “it’s all up in the air.” 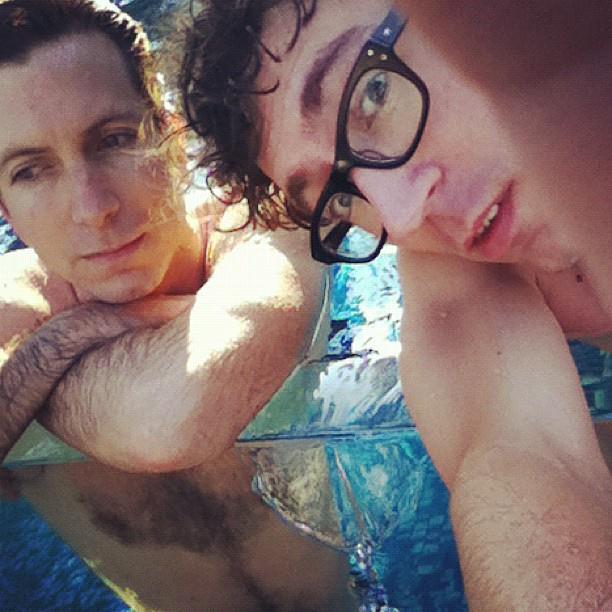