Mother Of Man Shot In Confrontation With SFPD: “Mr. Harding was not in possession of a gun when he fled from police” 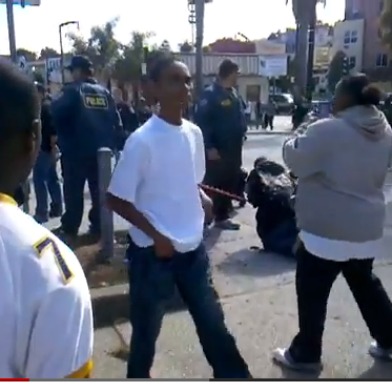 The mother of a Seattle man who died in a confrontation with San Francisco police at a transit stop in the city’s Bayview District one year ago has filed a federal wrongful death and civil rights lawsuit against the city.

Police have said that Kenneth Harding Jr., 19, apparently shot himself during an exchange of gunfire with police as he ran away from two officers who sought to detain him for alleged fare evasion on July 16, 2011.

His mother, Denika Chatman of Solano County, filed the lawsuit on behalf of herself and Harding’s estate in federal court in San Francisco Friday against the city, Police Chief Greg Suhr and Officers Matthew Lopez and Richard Hastings.

Among other claims, the suit alleges police violated Harding’s civil rights by failing to provide urgently needed medical care after he was critically wounded and lay bleeding on the ground.

“The officers did not provide any medical treatment or care to Harding and instead left him writhing on the ground with blood gushing out of his neck,” the lawsuit alleges.

The alleged failure to give medical aid caused Harding to endure “unnecessary and increased pain and suffering,” the suit contends.

It seeks an unspecified amount of financial compensation, including punitive damages, to be determined at a trial.

Jack Song, a spokesman for City Attorney Dennis Herrera, and police spokesman Officer Albie Esparza said they could not comment on the case because the litigation is ongoing.

The lawsuit additionally suggests that it may not be clear how Harding was shot.

While police have said Harding had a gun and fired first on the officers, the lawsuit states, “Plaintiffs are informed and thereon believe that Mr. Harding was not in possession of a gun when he fled from police, nor did he fire a gun upon Officers Lopez and Hastings.

“Witnesses to the incident claim they never saw Harding brandish, fire or attempt to discard a gun,” the lawsuit alleges.

Adante Pointer, a lawyer for Chatman, said one of the purposes of the lawsuit is to find out what did happen.

“We’re saying that at this point, it’s very unclear what took place,” he said.

“I can’t say to a degree of certainty that the police did not fire the fatal shot,” he said.

“From our standpoint, all the investigative material should be made available not only to the family, but to the community. The city should be handling this in a transparent fashion,” Pointer said.

The incident led to several protest marches and rallies by city residents, most recently on the one-year anniversary of Harding’s death on July 16.

A video taken by an onlooker of Harding as he died on the ground has been posted on the Internet.

“He was face down in a prone position, violently slapping around like a fish out of water, and no effort was made to give him any kind of medical help,” Pointer alleged.

San Francisco police initially said the officers appeared to have shot Harding during the gunfight, but later announced that the city’s chief medical examiner, Dr. Amy Hart, determined that Harding died from a gunshot to the head with a .380 caliber bullet, which is inconsistent with police weapons.

Police also later said they recovered the .380 caliber gun allegedly used by Harding and that they found an unused .380 caliber bullet in his jacket pocket.

They said several eyewitnesses said Harding fired first and that gunshot residue found by the medical examiner on his right hand supported the police claim that he had a gun.

Harding was on parole in Washington after serving part of a 22-month sentence for attempting to promote the prostitution of a 14-year-old girl, and was violating his parole by being in San Francisco, police said.

A case management conference on the federal lawsuit has been scheduled before U.S. Magistrate Judge Nathaniel Cousins in San Francisco on Oct. 31.