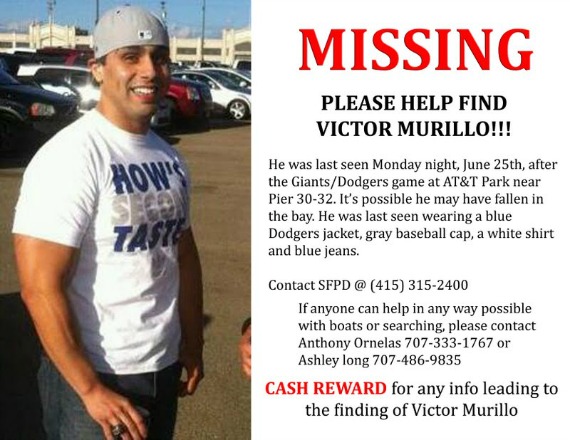 A man’s body that was found in the water along San Francisco’s Embarcadero this morning has been identified as that of Los Angeles Dodgers fan Victor Murillo, 27, who went missing after a baseball game last week.

The San Francisco medical examiner’s office confirmed the man’s identity this afternoon, and said an investigation into the cause of death was under way.

Murillo went missing near Pier 32 the night of June 25 after watching the San Francisco Giants play the Dodgers.

Murillo and his friend had just come from AT&T Park and were at the pier when his friend looked away momentarily. When the friend looked back, Murillo was no longer on the pier, U.S. Coast Guard officials said.

The Coast Guard and San Francisco firefighters scoured the Bay for signs of Murillo but were unable to find him.

Last Friday, dozens of Murillo’s friends and family members carried out their own search, distributing flyers and recruiting volunteers with boats to search the water.

San Francisco police spokesman Officer Carlos Manfredi said a passerby spotted the body in the water near the foot of Howard Street shortly before 8 a.m. today.

He said the passerby flagged down a nearby San Francisco Fire Department boat, and firefighters responded and retrieved the body from the Bay.

Murillo, a Woodland resident who works as a corrections officer in Vacaville, moved to Northern California several years ago, friends said.