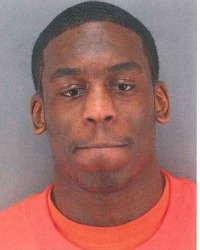 A San Francisco man was arrested Wednesday in connection with a January robbery in San Francisco after DNA evidence led police to the suspect, police said.

Devon Williams, 21, allegedly stole a cellphone from a passenger on a Muni bus near De Haro Street and Southern Heights Avenue on Jan. 4, police said.

Williams fled, and as the victim pursued, the culprit dropped his knit cap but got away with the phone, according to police.

Police searched the area and took the cap for DNA testing, which they cross-checked with a Muni surveillance video, leading investigators to Williams, police said.

Williams was in custody in the San Francisco County Jail for an unrelated incident when police sergeants interviewed him about the January robbery on Wednesday, police said.

The sergeants immediately recognized Williams from the surveillance video and placed him under arrest, police said.