Giants Homestand
Friday, Saturday and Sunday the Giants will host home games at AT&T Park. More details about Muni service to AT&T Park, including connections from other Bay Area transit systems, can be found at sfmta.com. Traffic impacts and taxi and bike options are also online.

The following street closures will be required from 6 a.m. to 8 p.m:

Event participants are encouraged to take public transportation to the event as there will be limited street parking. Monitored bicycle parking will be available on Cole Street between Page and Haight streets. 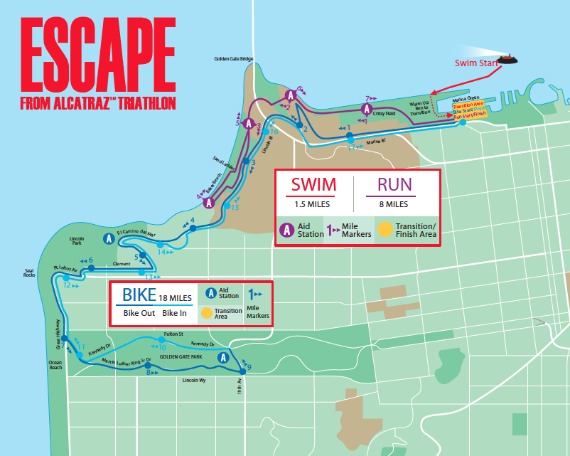 The route of the bicycle portion of the triathlon will be as follows: from Marina Green through Crissy Field and the Presidio to Legion of Honor Drive, right on Clement to the Great Highway, through Golden Gate Park via Martin Luther King, Jr. Drive to Transverse, and return via John F. Kennedy Drive on the same route to Marina Green.

The entire bike route will be heavily monitored by SFPD, SFMTA Parking Control Officers and race officials. Traffic will be slow in the affected areas and motorists will be delayed as the race passes.

The route of the running portion of the triathlon will be as follows: from Marina Green into The Presidio to Fort Point, south on the Coast Trail to Baker Beach and back to the Marina.

The following Muni routes will be affected by the triathlon:

From 7 a.m. to 6 p.m., Sunday, there will be a temporary street closure on Mission Street between Beale and Main streets.

U.S. Open Championship
The US Open (the national championship of golf in the United States) will take place at The Olympic Club in San Francisco starting Monday, June 11 through Sunday, June 17. The U.S. Open will offer free shuttles from the Colma BART Station and Candlestick Park.

Detour signs will be posted. The SFMTA will deploy Parking Control Officers (PCOs) near the event as well as at Candlestick Park to facilitate traffic, including pedestrians and transit vehicles.

The 18 46th Avenue Route will be affected.