May 25 to June 4 Long Muni Rail Shutdown
The shutdown of the N Judah Line, the partial shutdown of the J Church Line and re-routes of the 22 Fillmore and N Owl routes will continue through 5 a.m., Monday, June 4.

Traffic detours as well as bike detours for the Wiggle, the Steiner/Sanchez route and the connector route between the Wiggle and Market Street will also be in place.

Giants Homestand
Friday through Monday, the Giants will host a home series at AT&T Park. More details about Muni service to AT&T Park, including connections from other Bay Area transit systems, can be found at sfmta.com. Traffic impacts and taxi and bike options are also online.

Black and White Ball
The San Francisco Symphony will host its bi-annual Black and White Ball on Saturday in the War Memorial Performing Arts Center and City Hall. Dinners will begin at 5 p.m., the General Ball will start at 9 p.m. and continue until 1 a.m., Sunday.

Motorists are encouraged allow extra time and to use Larkin Street to travel northbound if possible to avoid traffic congested in the event area.

Union Street Eco-Urban Festival
The annual Union Street Festival will be held from 10 a.m. to 6 p.m., Saturday and Sunday on Union Street between Gough and Steiner streets.

The following street closures will be required from 12 a.m., Saturday to midnight, Sunday:

Fillmore Street will remain open for through traffic, though it may be congested due to crowds. There will be local access for residents on the impacted streets except for Union Street.

Statuto Race
The 92nd annual Statuto Race will begin at 9 a.m. on Sunday in North Beach. There will be an 8K run and a 2-mile walk this year.

The 39 Coit Muni bus route will be affected. 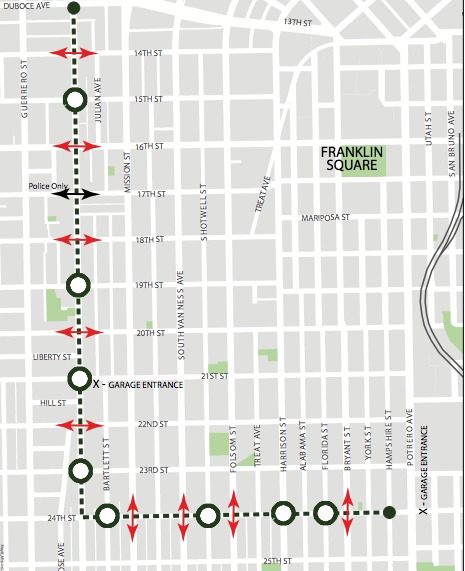 The fourth of 10 Sunday Streets events will be held this Sunday in the Mission District. Sunday’s event is a 2.2-mile route and includes street closures on portions of 24th Street, Valencia Street and various adjacent streets. The route will be available for recreational activities from 11 a.m. to 4 p.m. The event is free to all participants.

Cross traffic at 24th Street will be allowed on:

Cross traffic at Valencia Street will be allowed on: