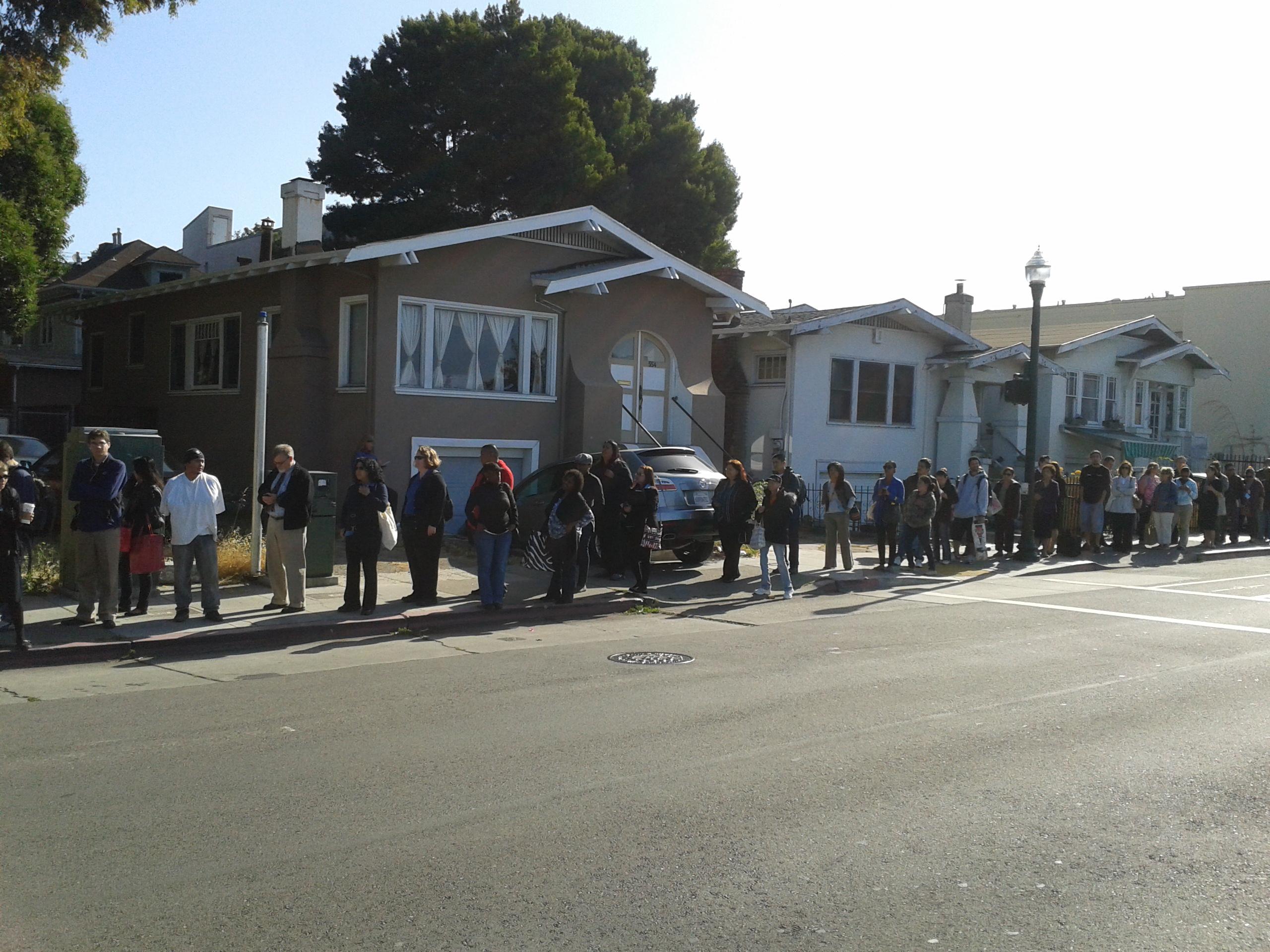 With no BART service through the Transbay Tube this morning because of a three-alarm fire near the West Oakland station overnight, commuters traveling between San Francisco and the East Bay turned to alternate modes of transportation.

Limited BART service is expected to resume through the Transbay Tube this afternoon, BART officials said.

Bus lines grew long–stretching for blocks in some locations–as riders found that there was not enough space on arriving buses to accommodate them.

“Buses that are normally in our yard … have been deployed,” Johnson said mid-morning. “Folks just need to be patient.”

BART riders trying to get into the city were instructed to disembark at the MacArthur or 19th Street/Oakland stations to catch buses, but demand was so high that commuters were left waiting for more than an hour.

Mark Stuart, 62, of Roseville, waited in line outside the MacArthur station for an AC Transit bus to San Francisco. He said he was visiting the area and was on his way to the U.S. Open, and had been encouraged by event organizers to take BART.

Stuart said around 8:30 a.m. that he had been waiting for more than half an hour, and had made it little more than halfway to the front of the line, which stretched several blocks behind him.

He plans to stay in the Bay Area until Sunday, and said he has been doing some sailing while he’s in town.

“I actually could have sailed faster than taken BART,” he said.

“We didn’t know about this until we got down to the BART station.”

Majid Amini, 26, a nurse who lives in Concord and commutes daily to San Francisco, said his typical commute from Concord takes about 45 minutes, but that today he was anticipating it would take as long as two hours, and that he would be very late for work.

He said, however, that his boss was stuck in traffic and would understand his predicament.

“I was going to ride my motorcycle,” he said. “I should’ve done that.”

Bay Area highways were clogged as many commuters opted to drive once they heard about the Transbay Tube shutdown. It took one commuter three and a half hours to drive from Walnut Creek to San Francisco.

For the evening commute, additional AC Transit buses will be deployed to the Transbay Terminal at Beale and Howard streets in San Francisco to transport commuters back to the East Bay, Johnson said. Bus service from San Francisco is expected to begin earlier than normal, he said.

This morning at the Jack London Ferry Terminal in Oakland, there was enough space on the ferries to accommodate the riders who were waiting, Sanchez said.

Continuous ferry service will be offered throughout the day, even on routes where service normally runs only during peak commute hours.

The boats are carrying at least four times their usual passenger load, Sanchez said.
Commuters are “welcome to come on down,” Sanchez said mid-morning.

For commuters trying to get to the East Bay from San Francisco, extra AC Transit buses were dispatched to San Francisco’s Transbay Terminal this morning.

San Francisco Municipal Transportation Agency spokesman Paul Rose said Muni ridership was down this morning, with fewer passengers able to get into the city.

Muni officials advise commuters headed to Oakland and beyond to take the 38-Geary to catch AC Transit buses at the Transbay Terminal.

Muni Ambassadors are assisting passengers using Muni and AC Transit instead of BART, and will have extra support at the terminal this afternoon.

Additional crowds are expected in downtown San Francisco this afternoon for the Giants-Astros game at AT&T Park scheduled to begin at 12:45 p.m.

“We are ready to assist,” Rose said.

CAPTION: Stranded commuters line up for buses along 20th Street near Broadway in Oakland. 40th Street in Oakland, just outside the MacArthur BART station. (Thanks, Brad!)