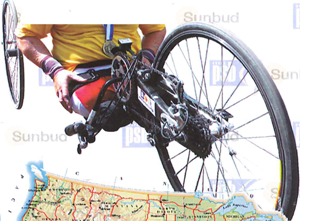 San Francisco police are asking for the public’s help in finding a custom bicycle specially built for a handicapped man who found that the bike was stolen in the city’s Hayes Valley neighborhood this morning.

Officers responded around 10 a.m. Thursday to a report of a burglary in the 200 block of Linden Alley, located between Hayes and Fell streets just west of Franklin Street.

The victim said that the item stolen was a hand-cranked bicycle, valued at $13,000, that was taken from the stairway area of the building, police said.

Investigators believe the theft took place between 10 p.m. Wednesday and 6 a.m. today and that a cutting tool was allegedly used to gain access to the entryway of the building.
Police have released a photo of the bike, which has a distinctive sponsor sticker on its side with the letters “AZSLODZ.”

The victim is on vacation from Poland and is involved in a charity bike ride across the country. He will be using a wheelchair to complete the tour, according to police.

Anyone with information about the whereabouts of the bicycle or a possible suspect is asked to call Sgt. Victoria Sullivan with the department’s Northern Station investigations team at (415) 614-3465.