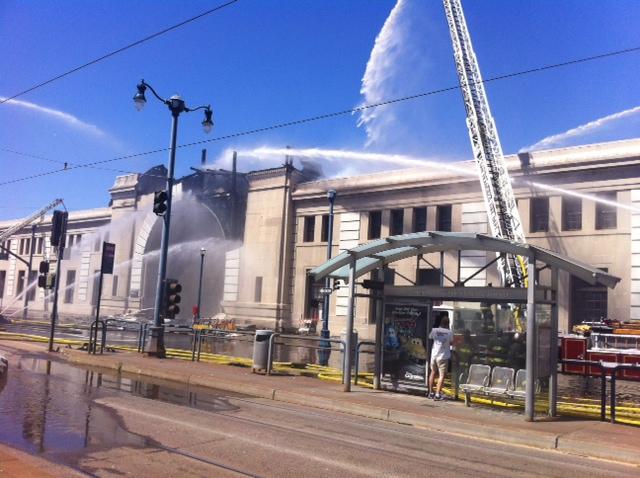 The blaze was reported at about 1:50 p.m. at the two-story waterfront building located at the intersection of The Embarcadero, Sansome and Chestnut streets. The building was vacant and under construction in preparation for the America’s Cup sailing race in 2013.

Firefighters spent more than two hours attacking the fire from several angles, including from a fireboat on the Bay, before extinguishing the flames at 3:59 p.m., fire officials said.

The cause of the blaze had not been determined as of this morning, but a fire investigator has estimated the damage to the structure at $2.37 million, fire spokeswoman Mindy Talmadge said.

The building is slated to house the operations staging area for the America’s Cup regatta, according to Monique Moyer, executive director of the Port of San Francisco.

Talmadge said the fire investigator was unable to fully examine the building on Wednesday night because it had not been deemed structurally sound, but that investigators would be going back to the scene today to try to determine the cause.

Fire Chief Joanne Hayes-White said Wednesday that a preliminary investigation indicated that construction workers may have been in the building prior to the fire, but it was too early to determine whether any construction work sparked the blaze.

The fire caused the closure of several blocks of The Embarcadero for hours on Wednesday, and interrupted service on San Francisco Municipal Railway’s F-Market & Wharves streetcar line. Service resumed early this morning.