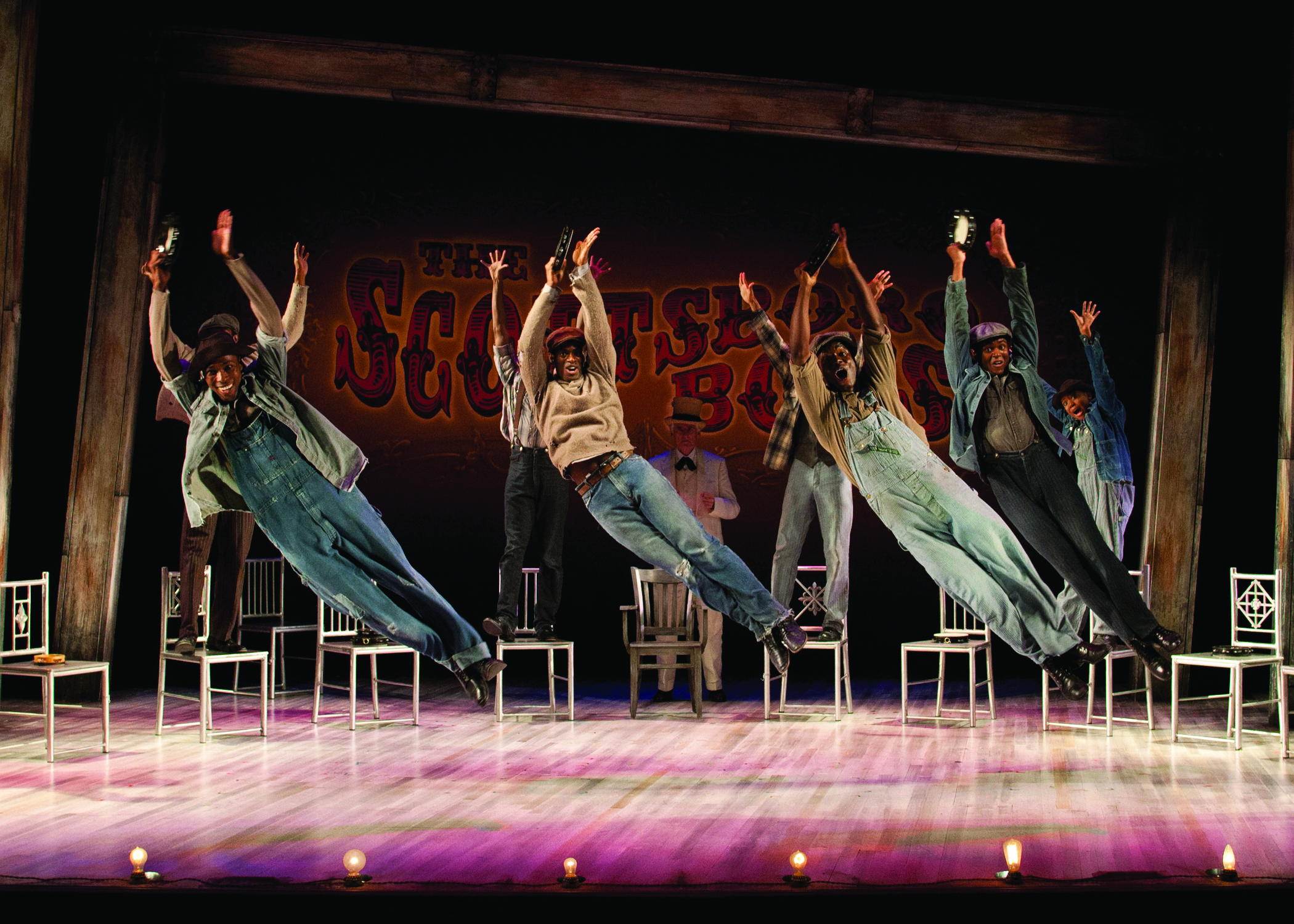 In musicalizing the story of the Scottsboro Boys — a group of 9 black teenagers falsely convicted of raping two hoboing white women on an Alabama freight train in 1931 — the play appeared to be making light of a very dark event in U.S. history. To boot, the play is framed as a minstrel show, a traditionally racist spectacle.

The protests subsided quickly as the play’s feat became clear: The Scottsboro Boys manages to cast light in the midst of dark subject matter without making light of it. Moreover, the minstrel device is what makes this possible.

Minstrelsy typically presents a trivial narrative, performed by white actors in demeaning blackface. The Scottsboro Boys completely inverts this, presenting heavy subject matter performed by an almost entirely black cast (the one exception is the character of The Interlocutor, played by Hal Linden in the A.C.T production) who play not only the boys but white deputies and the alleged rape victims themselves — an opportunity ripe for ironic humor. Thus, the play sets up two parallel narrative planes, that of the heinous story itself and that of its minstrel-staged telling, whose diametrically opposed tones are able to coexist without tension.

The Scottsboro Boys revels in its temporal placement, incorporating song and dance styles of the 1920s and 30s — think tap-dancing and cake-walks — shadow plays and minstrelsy antics. It’s not as sexy as Chicago, but it is thoroughly entertaining and expertly choreographed. On top of all that, it manages to carve out individual characters (to the limited extent that a conventional musical can) and never loses sight of the gravity of the subject matter at hand.

The Scottsboro Boys also uses the minstrelsy format to comment on the insidious relationship between entertainment and the reproduction of violent social systems. The actual Scottsboro trials were ultimately spectacle, it reminds us; the boys stood no chance of receiving a just trial in any sense of the word, and the proceedings were frequently compared to minstrel shows.

Thompson’s play attempts to utilize entertainment for opposite purposes — to broadcast a critique of the racism/entertainment complex to a wide audience, and in so doing give people the courage to fight it. Its final scene, which, totally disconnected from the preceding narrative, portrays Rosa Parks’ famous act of defiance, makes clear the play’s heroic self-assessment.

It is also a cheap way to get a standing ovation.

To be sure, the issues at hand in The Scottsboro Boys remain all too relevant. Yet, the play completely fails to resonate with contemporary social discourse. The book is robed in a tame, non confrontational old timeyness — not only in its stylings but in its attitude.

Where bolder playwrights like Trey Parker and Matt Stone use irreverent humor to say the unsayable, in effect launching their subject matter into the immediate present, Richards’ lame brand of minstrel humor, clownish and ironic, succeeds only in dusting off the Scottsboro story before sliding it between the distant chapters of a history book from which it had been omitted.

Obvious insights are dropped like revelations. “You’re guilty ’cause of the way you look,” a character is told, followed by several long, reflective seconds. In what decade would such a line be pauseworthy? More than the straw hats and tap dancing, softballs like this place the audience at a comfortable cultural distance from the subject matter. The atrocities portrayed seem to belong to a distant era, and the roots of today’s racial/political complexities are all but invisible.

Scottsboro is a well acted and well choreographed play, entertaining and easy to recommend, but it isn’t worth the protest it received.

The Scottsboro Boys runs through July 22 at A.C.T