An “Explosive” Headline: Man Injured In Newspaper Box Incident At Polk And Green 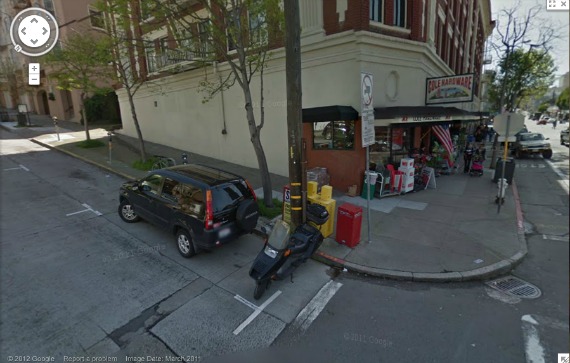 A local newspaper carrier is hospitalized after a mysterious incident involving a Polk Street newspaper box injured his eye.

SFPD spokesperson Officer Albie Esparza confirmed to the Appeal that at 3:05 this morning, SFPD and the SF Fire Department were called to the southwest corner of Polk and Green on reports that an explosion had injured a newspaper carrier who was loading papers into a single-copy box.

According to Esparza, the carrier said that as the box was opened, there was an explosion significant enough to injure the carrier’s eye. He was transported to SF General Hospital with non-life-threatening injuries.

However, Esparza says that after an SFPD investigation, no evidence of any explosive device was found.

Esparza would not name the publication for which the carrier worked, nor what publication’s newspaper box apparently caused the carrier’s injuries.

As you can see from the Google maps image above, that corner contains boxes for the SF Chronicle, SF Weekly, and the SF Examiner. Attempts to reach those publications’ circulation departments were not successful at publication time.