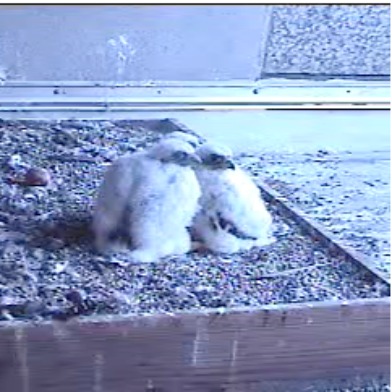 Aside from the steady decline in the pigeon population surrounding the PG&E building at the corner of Mission and Main streets in San Francisco, the presence of four baby peregrine falcons is otherwise hidden from the naked eye.

The chicks, two girls and two boys, or tiercels, hatched at the end of March and are now fully grown but are still developing their feathers and learning to flap their wings. You can watch a live webcam of their nest here.

Before the chicks take flight in about two weeks, PG&E aims to name the birds and is asking for the public’s help.

Last week, scientists from the University of California Santa Cruz Predatory Bird Research Group, which monitors the peregrine population in the Bay Area, stepped out onto the ledge of the 33rd floor of the PG&E building to tag the healthy chicks with identification bands.

At a news conference following the banding, PG&E’s director of environmental policy Diane Ross-Leech announced that members of the public can submit name suggestions for the eyasses via Twitter to @PGE4Me.

Although the peregrine falcon population has made a strong comeback since the 1970s, when only two pairs were known in California, “there’s more work to be done” to keep the species thriving, Molica said.

The last day for submissions is Friday, and the submissions will be whittled down to 10 finalists.

The final four names will be chosen by volunteers who assist the research group.

As of this afternoon. PG&E had received about 40 submissions. PG&E is asking for submissions with two girl and two boy name suggestions.