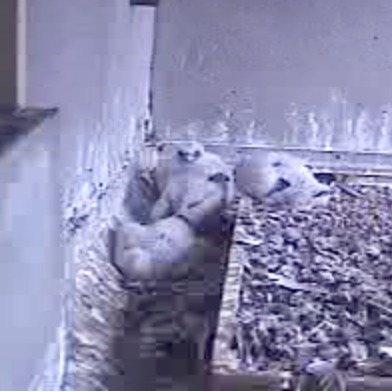 The four young peregrine falcons that live atop the PG&E building in downtown San Francisco officially have names, a PG&E spokesman said this afternoon.

PG&E had asked the public to submit suggestions in a naming contest that ended Friday.

The submissions were narrowed down to 20 choices, from which dedicated volunteers who monitor the birds through the University of California at Santa Cruz Predatory Bird Research Group selected the final names for the two male and two female eyasses.

“The ink on their birth certificates isn’t yet dry,” PG&E spokesman Joe Molica said before revealing the names for the five-and-a-half-week-old birds–Perry, Sutro, Amelia and Electra.

“We want to thank everyone who took the time to vote. This is a great way to raise awareness of a species that has had an amazing comeback story,” he said.

In the 1970s, only two peregrine falcon pairs were known to nest in California. In 1999, the birds were removed from the U.S. endangered species list thanks to successful recovery efforts.

Scientists with the research group determined the birds’ sexes on April 23, when they also tagged the eyasses with visual identification and U.S. Fish and Wildlife leg bands.

Perry, who wears the 85/B visual ID band, was named after a beloved San Francisco police officer with more than 30 years’ experience who had passed away, Molica said, adding that one of the officer’s relatives loves the birds and follows the falcon web cam, which gives the public a window into the young birds’ lives on the building’s 33rd floor.

Sutro, named for the mining magnate Adolph Sutro whose name lives on several San Francisco landmarks, including the cliffs on the city’s western shore, carries the visual ID band 61/D.

Researchers with the UC Santa Cruz group expect the birds, which have been eagerly flapping their wings and building wing strength in recent days, will fledge sometime this week.

Volunteers participating in the group’s “fledge watch,” which monitors the site at Mission and Main Streets around the clock to provide assistance should the young birds need it, will be on hand beginning Wednesday, Molica said.