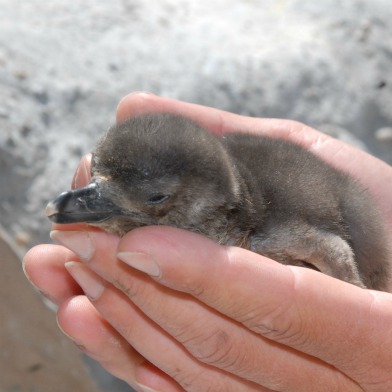 Four Magellanic penguin chicks have hatched this breeding season at the San Francisco Zoo, and will be on display until the end of June when they’ll head off to “Fish School,” zoo officials said.

At Fish School, the penguins will learn to swim and be hand fed by zookeepers, one way for zoo staff to monitor the health of the penguin chicks.

The penguins will return to their colony on Penguin Island at the end of July.

Magellanic penguins are named because they are native to the Straight of Magellan in southern Chile, but can also be found in coastal Argentina, the Falkland Islands and even Brazil.

When the chicks grow up, they could be as tall as thirty inches and weigh over 14 pounds. In the wild they feed on cuttlefish, sardines, squid, krill and other crustaceans.

Magellanic penguins mate with the same partner every year, when the male reclaims the same burrow from the previous year and waits to reconnect with his former partner. The female recognizes the male from his call.

One chick that hatched on May 20 was born to penguin couple Bruno and Rizzo who were also born in the San Francisco Zoo.