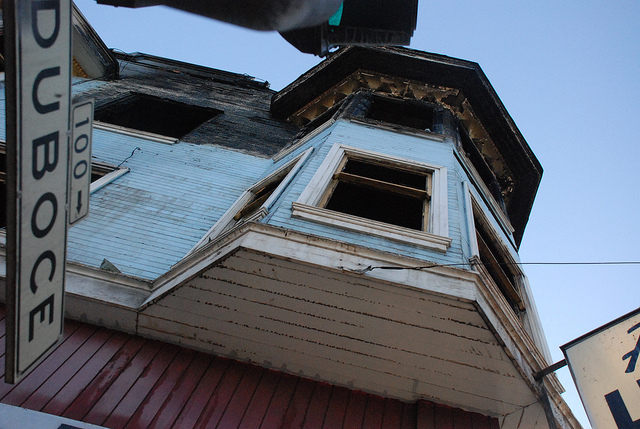 Residents of the Duboce-Valencia neighborhood met Thursday evening to rally donations for victims, connect with city officials and figure out any necessary next steps.

On Sunday May 6, a 4 alarm fire erupted in the apartment building above Fred’s Liquors on the corner of Valencia Street and Duboce Avenue, displacing 37 residents.

McNaughton was unable to give any specifics about the fire’s cause but did confirm “we don’t believe it’s suspicious in nature, we have the location of origin down but I can’t share that with you except that it’s in the shaft between the two buildings. Any causes (of) ignition related to that are not suspicious.”

When asked about the explosion reported by multiple neighbors, McNaughton told the neighborhood “to the best of the fire investigative unit’s knowledge they don’t have any flammables that would have caused that. They are focusing on some possible electrical issues there. Sometimes normal combustibles, hair spray for example, can make a pop. To the best of our knowledge right now we don’t have any evidence of an explosion.”

All officials present confirmed the building is off limits and is not structurally sound.

Though both Logan and Amyes confirmed that victims — some of whom had lived in the building as long as 50 years — have access to volunteer counseling services. Many have been temporarily placed in hotels and provided with one change of clothes, the Red Cross said, but meeting attendees raised concerns about what would happen to them after that.

Margarita Acosta, a teacher from the school attended by five of the children displaced by the fire, was there to speak with disaster services regarding their placement.

“I’m hoping they can find more permanent housing for the kids so they can continue to attend their school” Acosta said, approaching Logan towards the end of the meeting.

While donations to the Red Cross were encouraged, one person asked how to donate money to victims of this particular fire by way of the Red Cross. But that’s not possible without holding a private fundraiser. Logan confirmed that when donating money on the Red Cross website (or anywhere else) one can choose SF Disaster Relief or the General Relief Fund (global).

However, there is no way to donate specifically for one set of victims of one particular disaster within the city. District 8 Supervisor Scott Wiener pointed out that private fundraisers can be held as a workaround to this concern, many of which have been successful in the past.

District Supervisor Kim encouraged the neighborhood to visit 72hours.org to make sure homes are more than just up to fire code standards, but earthquake ready.

Instead of running away to a city where the buildings aren’t made of kindling, neighbors ended the meeting with applause for the Fire Department and decision to meet again in two weeks.

Friends School has been voluntarily collecting clothing, toiletries and blankets for victims of the fire and will continue to do so until 5pm Friday May 11.