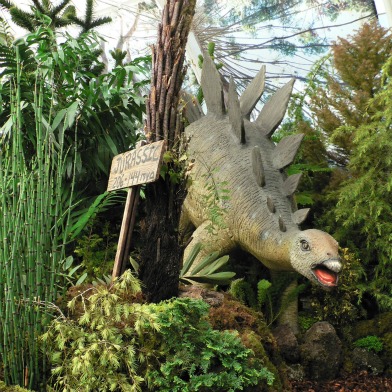 The dinosaurs have returned and they have taken over San Francisco’s Conservatory of Flowers in Golden Gate Park starting today.

The latest exhibit to open at the JFK Drive greenhouse is “Plantosaurus Rex,” which takes visitors back to the Mesozoic Era through October.

The summer show “is a great way to tell the story of plant evolution,” conservatory spokeswoman Nina Sazevich said.

With a giant tyrannosaurus rex smashing through the roof of the conservatory, the exhibit also displays the plants that covered the earth approximately 250 million years ago including giant ferns, horsetails and cycads.

Golden Gate Park has been transformed into Jurassic Park with conifers and Gingko canopies covering the space but there’s plenty of room for life-size models of the creatures that once roamed the Earth.

Models of an allosaurus, pterodactyl, and strange-looking dragonfly creatures and even a baby stegosaurus are placed throughout the exhibit and most noticeable is the T. rex “busting through the roof,” according to Sazevich.

Sazevich said children and adults alike will be fascinated by the prehistoric flora and fauna which show the development of what became the plants and animals we see in our world today–plus there are buttons throughout the exhibit to make the T. rex roar and bring a model volcano to life.

The exhibit will run through Oct. 21 at the conservatory located at 100 John F. Kennedy Drive.