A Dim Conclusion: Play and Endgame at A.C.T.

Samuel Beckett’s Endgame is a play about the end; whether of all humanity or merely one individual consciousness, critics continue to debate, and a convincing argument could be made for “both.” Its four characters hobble about a dungeon-like sinkhole of routine, going through the daily motions. Their provisions are dwindling, and they are moving unbearably close to the dreaded blackness that awaits on the other side.

Endgame is probably the toughest of Beckett’s major plays. It cuts the grimness with a helping of gallows humor (“nothing is funnier than unhappiness,” one character famously notes), but there is no getting around it: the play is bleak – arresting when done well, but pretty darn bleak.

The A.C.T. and director Carey Perloff’s decision to precede this weighty work with Play, one of Beckett’s lesser known and rarely staged plays, was a brilliant choice. In a brisk twenty-two minutes, Play manages to both set the tone and provide some much-needed balance for the evening. 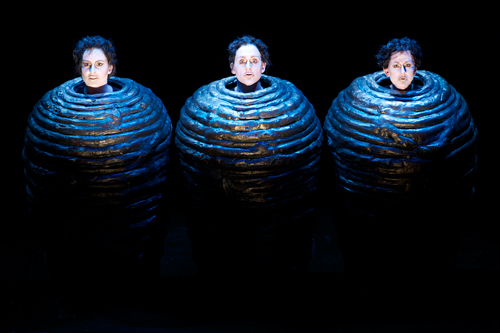 The curtain rises on three characters, one man (Anthony Fusco) between two women (René Augesen, Annie Purcell), each encased in a cocoon-like urn with only his or her ridiculous head protruding. An interrogating spotlight jumps from one of their aghast faces to the next, compelling each to recount bits and pieces of their bygone love triangle in turn, at breakneck speed.

After eleven minutes of this, by which point the characters are thoroughly confused, delirious, introspective and insane, the light goes out. It stays that way just long enough for a few people to begin clapping (perhaps in relief), only to snap back on and pull the trio through a second run, identical to the first one, line for line.

With this, it is clear enough that you are in for an evening of fearless and bizarre theater. The speed of Play, however, is ten times that of Endgame; the subject matter that much more concrete; the humor – a sort you can order without a heaping side of existential dread. It’s a savory morsel before a very bitter draught.

You can pre-order drinks for intermission.

Endgame portrays a day in the life of Hamm (Bill Irwin), an ailing, blind and immobile old wretch, his hobbled servant Clov (Nick Gabriel), and Hamm’s aging Irish parents, Nagg (Giles Havergal) and Nell (Barbara Olivier), whom Hamm keeps in trashcans. The set is dungeon-like – grey walls with two narrow windows, one of which ostensibly looks out at “the earth,” the other at “the sea.” The characters speak of the outside in a post-apocalyptic tone; they are apparently the only people left.

Trapped within these stark limits, the characters can hardly develop into characters at all, in the usual sense. They offer only the slightest glimmer of their pasts and fear perhaps nothing more than having to project a future, lest they glimpse the horror of what it might entail. One common view of the play interprets the room as the inside of a head (two windows: two eyes), and the characters not as individual people, but grappling fragments of a single, pretty messed-up psyche.

The focus, in any case, does not fall on any one protagonist, but rather on the incredible relationship between Hamm and Clov – an all too real tug of war between emotional need and repulsion. It’s a tough balance to strike, and it requires great actors to pull off.

Irwin started his acting career with Barnum and Bailey’s as a clown. After transitioning to “straight” acting, he began taking up almost exclusively Beckett parts – a niche in which he has consistently excelled. His Hamm is a mixture of pathetic, cruel and amusingly bonkers. Constantly toggling between a handful of voices, barks and whimpers, he falls somewhere between Jack Nicholson’s and Heath Ledger’s portrayals of The Joker.

Gabriel’s Clov, meanwhile, seems vaguely adolescent, responding to Hamm’s bossy insolence with huffing frustration, irritated whine, distant irony or moody self-pity. Irwin, true to his character’s name (Beckett likely intended for the hamm/ham homophone), steals the stage whenever the two are co-present, and without the benefit of being able to move.

As such, the two solutions fail to react, and the play eventually succumbs to what is probably its greatest threat: monotony. By the end, I found myself unfortunately aligned with the character of Hamm — just waiting for the lights to dim.

Play and Endgame run through June 3 at A.C.T.