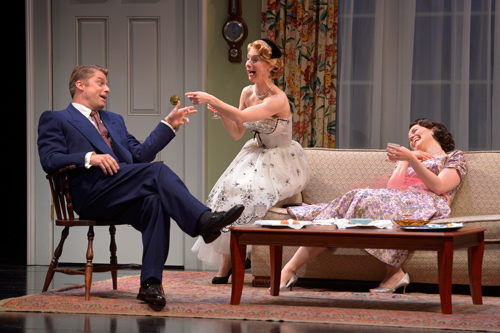 You work at a start up; you spend half your income at fancy bars. You order sushi – it comes; you leave your trash at the end of the hallway – it goes. You’re a woman? Great. Gay man? Even better.

The yuppie life is a cushy one, alright, with access to more consumer and lifestyle choices than have ever been on offer previously in human history. And yet, within this group of privilege there are a great many who do, for some reason, harbor a vague but nagging desire to go back rather than continue pushing forward. Maple and Vine asks why.

“I don’t know if I’m nostalgic for the 1980s or the 1880s,” says protagonist Katha (Emily Donahoe), a Random House editor, with regard to her beloved Anne of Green Gables miniseries. She and her husband Ryu (Nelson Lee), a plastic surgeon, are seated at the breakfast table of their enviable Manhattan apartment, each staring into his/her respective Macbook.

Katha’s impersonal, technology-mediated contemporary world is really doing a number on her mind/soul. She is on the verge of a nervous breakdown when she meets Dean (Jamison Jones), a dapper, if anachronistic looking fellow in a grey suit and fedora, who makes her an appealing offer: to join a sequestered, Midwestern community bent on living, as “authentically” as possible, like it is perpetually 1955. Katha (soon to become Kathleen) dives in headfirst, with a remarkably easygoing Ryu in tow.

“Here is a word you have never heard of: hummus,” instructs Ellen (Julia Coffey), with a wave of her kid glove. She is indoctrinating the newest batch of inductees – Katha and Ryu among them – to Dean’s time-warped Society of Dynamic Obsolescence. “Baba ghanoush. Sushi. Foccacia. You’ve never heard of any of them.” Katha positively lights up at the diminishing of choices.

In the contrived 1955, Katha is a chipper housewife and Ryu works an entry-level job at a box factory. A parade of simple old-time pleasures ensues – crab puffs, copious drinking, charades and ballroom dancing, in that order. It is exactly the return to ostensibly people-centered, technology-stripped society that Katha has been craving.

Of course, there are tradeoffs. A zealous Ellen is fighting to ban birth control, homosexuality is relegated to the perilous fringes of the society, and Ryu’s boss, Roger (Danny Bernardy), responds to the ex-surgeon’s Japanese ancestry with a healthy helping of racial prejudice and insensitivity. The war and internment, remember, are still fresh in everyone’s minds.

In response, Katha appears before the town committee to deliver a speech on tolerance – specifically, how there has been too much of it. “You might stare at me in the supermarket, tell my husband how much you like Chinese food, have your teenage boys bang trash can lids outside our windows at 3 am,” she cheerfully suggests. Behaving otherwise, she believes, has been marring the authenticity of the community.

Maple and Vine could have here become a play about the 1950s – its despicable conservatism, suffocating social codes, and how misplaced our nostalgia for the era really is. With Kara’s stunning speech, though, the play veers in a far less trite direction, becoming instead a play about people who actually get a knowing thrill from repression, who are confused enough to actually desire an increased adversity quotient, if only for the “authenticity” of it.

Jordan Harrison’s script, under the direction of Mark Rucker, is consistently laugh-out-loud funny, surprising and insightful. The 50s are the play’s enticing veneer. At the heart of it, though, Maple and Vine is about today and, in particular, the origins of conservatism in that puzzling, paradoxical beast: the modern yuppie.

Maple and Vine runs through April 22 at A.C.T.; tickets