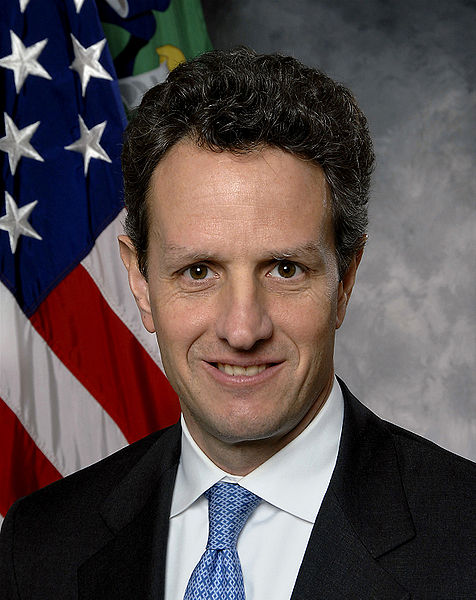 U.S. Treasury Secretary Timothy Geithner stopped by San Francisco Thursday to discuss the country’s economic relationship with China just a week before he heads to Beijing for a strategic talk on national and global fiscal issues.

Geithner addressed a crowd of more than 400 in the Peacock Court of the InterContinental Mark Hopkins hotel at the top of Nob Hill around 1 p.m. before he answered a slew of questions from Commonwealth Club forum moderator and Fortune magazine senior editor-at-large Adam Lashinsky.

In a prepared speech Geithner emphasized that solutions to economic problems in the U.S. are connected to China and other global markets but are “the result of the choices we make in the United States–not the choices of others.”

He added that prosperity in America depends on our homegrown economic policies even as we encourage further reforms in China.

He outlined two objectives in working with the Asian nation–the first an increase of U.S.-based companies exporting and selling to China and a move in China away from an export-oriented growth model.

Geithner noted China’s recent economic reforms including cuts to some Chinese tariffs in 2012 and a pilot program launched to reduce taxes on services. He cited a less than 3 percent Chinese trade surplus last year, compared to around 8 percent when Obama first entered office.

While Geithner said recent changes to China’s exchange rate system were welcome, he added that more change is necessary and the Chinese currency needs to appreciate further.

Geithner remarked that the Chinese financial system’s biggest challenge is the dominance of state-owned banks which he said favor lending to large state enterprises, depriving money to other sectors, among other problems.

To emphasize the need for further reform, he compared Shanghai to San Francisco when he said consumer products in the Chinese city can cost twice as much as those in the Bay Area.

He also mentioned his upcoming trip to Beijing with Secretary of State Hillary Rodham Clinton for a fourth meeting of the U.S.-China Strategic and Economic Dialogue.
The third meeting was held in Washington, D.C., last May.

The dialogue is an initiative created by President Obama and Chinese President Hu Jintao in 2009 to strengthen the relationship between the two nations, according to the Department of the Treasury.

After his remarks, the forum transitioned to a conversation with Lashinsky when a woman jumped from her seat near the front of the room and held above her head a hot pink sign while screaming, “Banks got bailed out, people got sold out.”

She was escorted out of the room by two of the many security personnel lining the walls while loudly asking, “Secretary Geithner, what are you going to do about the people?”

Lashinsky used the interruption to ask his first series of questions, reframing the question about the bank bailouts and American Recovery and Reinvestment Act of 2009.

Geithner acknowledged the polarizing decision to support the country’s banks at the start of the recession; however, he defended Obama’s choice.

“We have to do things that are difficult,” he said. “We didn’t do it for the banks, we did for the economy.”

He repeated throughout the discussion that the current administration has been tough on the financial system.

“The reforms are very tough and they will endure,” he stressed when asked if another financial crisis was on the horizon.

For the remainder of Geithner’s time on stage, questions written by members of the audience structured the conversation between the economic journalist and the country’s 75th treasury secretary.

After a question about the future of American manufacturing, Geithner reflected on his visit to industrial steel company, Oregon Iron Works, near Portland, Ore., on Wednesday and said we have not lost the ability to build things on American soil.

A serious, though slightly humorous, question about his first few days as treasury secretary in the face of a global financial breakdown in early 2009 prompted Geithner to say it was a “dark and scary” time.

Despite the crumbling financial environment at the start of Obama’s term, Geithner praised Obama, “He did the hard things early on.”

The conversation ended with the treasury secretary rebuffing any speculation that he was running for public office or being tapped as president of Dartmouth College, where he received is bachelor’s degree in government and Asian studies.