Ron Paul: “I don’t make a judgment” On SF’s Values 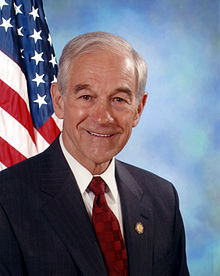 Republican presidential candidate Ron Paul today reflected on his relationship with the Bay Area, a region he says has always supported him despite its famously left-leaning tendencies.

In a telephone interview after a fundraising luncheon in San Francisco late this morning, Paul said his libertarian beliefs fit well with the area’s “live and let live” lifestyle.

“I don’t make a judgment on the values,” he said. “When people use their personal liberties and personal resources, I’m very open to how people act.”

Paul, who represents a district in Texas in the U.S. House of Representatives, first ran for president as a Libertarian in 1988.

Those contributors are “people who care about privacy and technology and getting the government out of your way,” he said, adding that many supported his strong stance against the Stop Online Privacy Act in Congress.

Paul is speaking this evening at a rally at the University of California at Berkeley. Thousands of students are expected to attend.

Paul said young people have been among the most fervent supporters of his campaign because “they seem to respond very favorably to the message of individual liberty and the free market.”

He said, “They think the government should stay out of our lives, and shouldn’t tell us what to do with our private lives” and said his desire for the U.S. to pull out of conflicts overseas also strikes a chord with young people.

“We’re involved in too many places overseas, and spend too much money,” he said.

Although former Gov. Mitt Romney is currently leading the Republican race by a wide margin of delegates, Paul said he plans to take his campaign all the way to the party’s convention in Florida this August.

“They’ve only just really started counting the delegates … many states takes a couple of months,” he said. “We’re waiting to find out how many we’re going to get.”

Paul also denied speculation that he might run as a third-party candidate in the November election.

“I’m not making any plans for that,” he said.

Paul visited UCLA on Wednesday and said he might return to California in May.

He is set to speak at UC Berkeley at 7 p.m. and said he will talk about the core principles of his campaign.

“Limited government, stop the wars, and look into the Federal Reserve,” Paul said.

“Government should be limited, and the deficit is going to be devastating if we don’t get it under control.”

Paul’s UC Berkeley visit is being organized by the campus group Students for Liberty.

The group’s founder, 22-year-old Casey Given, said it was scheduled to be held at Zellerbach Auditorium, which seats about 2,000 people, but a large turnout could move the event to a yet-to-be-determined outdoor location on campus.