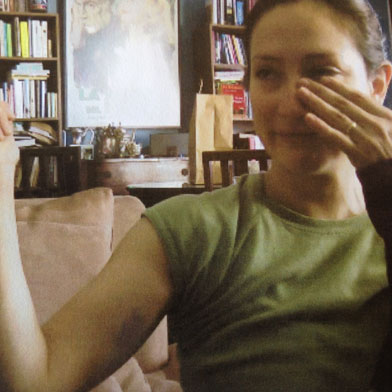 The fate of a key piece of video evidence in the domestic violence case against San Francisco Sheriff Ross Mirkarimi now rests in the hands of three appellant court judges after being challenged Friday by the attorneys of Mirkarimi’s wife, Eliana Lopez.

Mirkarimi, 50, has pleaded not guilty to domestic violence battery, child endangerment and dissuading a witness charges in connection with a Dec. 31 incident in which prosecutors say he bruised his wife Eliana Lopez’s arm during an argument.

Lopez has denied the charges against her husband. However, prosecutors have sought to use a 55-second video recorded by the couple’s neighbor Ivory Madison that reportedly shows Lopez crying, pointing to the bruise and recounting the incident.

After Mirkarimi’s attorney Lidia Stiglich on Monday unsuccessfully fought to have the video excluded as evidence under the court’s hearsay rules, Lopez’s attorney Paula Canny argued in a pretrial hearing on Wednesday that the video should be blocked because of attorney-client privilege.

Canny argued that Madison said, on her personal and business websites, that she was “trained as an attorney,” and that Lopez believed her to be a licensed attorney.

Prosecutors countered that while Madison graduated from law school, she has not passed the bar exam and is not licensed to practice law in California.

Assistant District Attorney Lindsay Hoopes also said that every reference to Madison in statements by Lopez have identified her as a “neighbor and friend,” not an attorney.

Judge Garrett Wong, who is overseeing the trial, denied Canny’s motion, saying that while Lopez may be the holder of attorney-client privilege, “the evidence is not being used against her,” so the motion lacks standing.

Canny on Friday filed an appeal to the San Francisco Superior Court’s appellate division, arguing that the “respondent court clearly abused its discretion in refusing to allow (Lopez) to assert her attorney-client privilege.”

The appeal could delay the start of the trial, which is set to commence with jury selection on Monday morning.

Later Monday, Wong will also continue an evidentiary hearing in which he will determine whether Christina Flores, an ex-girlfriend of Mirkarimi’s, will be allowed to testify in the trial.

Flores filed a police report in the days after Mirkarimi was charged on Jan. 13, saying he was also abusive to her when they dated between June 2007 and December 2008.

Stiglich has argued that Flores’ testimony should not be admissible because she never reported any of the alleged abuse before the current case involving Mirkarimi, and that there is no one to corroborate her accusations.

Flores met with Wong in a private hearing Friday morning, but the hearing was continued to Monday because Stiglich had to leave for a prior commitment, Donlan said.