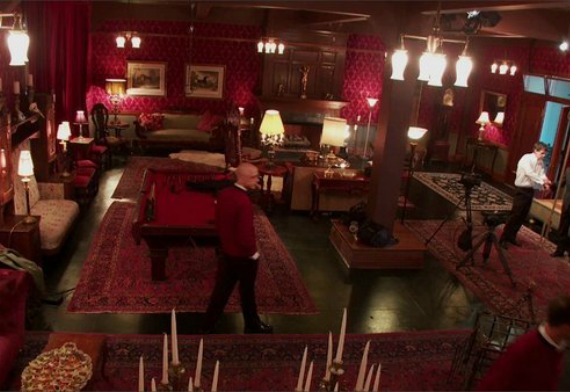 Of course, I first take advantage of the open bar in the corner of the parlor. Drink in hand, I’m surveying the set: the Edwardian-style room, the naked lady statues, the door slightly ajar that reveals the adjacent dining room…I spot James in this makeshift green room, and in my excitement I spill my gin and tonic on the rug. After later witnessing just how many times Princess Donna is able to make her subs squirt, though, I will decide that a little bit of alcohol and fizzy water will do the rug some good.

Around 7:30, director Princess Donna comes in and explains the lay of the land. In this shoot, Princess Donna is celebrating a belated birthday with the submissive Remy as her plaything. She checks her clipboard. Here are Remy’s limits. No face slapping or spitting. No pussy slapping. Light on the nipple play. As for the other subs in the shoot, you can do anything you want, as long as you ask them first.

Public Disgrace actually allows and encourages the audience to get involved in the scenes: to shout out suggestions, to verbally humiliate the subs, and to take pictures and videos of the whole spectacle.

This is not one of those shoots. This party has class.

Princess Donna now has the female subs line up in what I fear will become a Human Centipede reenactment. Instead, the male subs step in between the girls to form a line of doggy style sexing as Princess Donna flogs each model. And…scene.

The talent leaves for the green room while the crew sets up for the next act. The line for the bar is halfway around the room, so I stuff my face with hors d’oeuvres while I wait for the action to restart.

I plop down on a sofa and begin small talk with a Burner. In between showing me pictures of an art project and a girl he once dated (?), he interrupts himself.

“Is that a tranny in the corner?” he asks me.

Sigh. And that’s how, in explaining the preferred nomenclature of trans people, I miss out on Act II.

I lean against a stripper pole, balancing on one stiletto as I take my weight off the other one.

“You did a good job,” a man in a suit and tie says to me. I turn around, look at him quizzically. “You were out there, weren’t you?” he asks.

I shake my head “no.” Somewhere in the midst of Act II, the audience slipped into cruise control. Those who didn’t come partnered are now seeking them out. While I appreciate his compliment, I also know when I am being flattered.

For Act IV, Princess Donna breaks out the Sybians. Two of the girls are strapped to the machines, forced to ride out their orgasms. The other girl is suspended upside down, her breasts in bondage and a Hitachi wand tied to her crotch. The Sybian motors roar through this climax (and those of the models).

CEO Peter Acworth pops in and out of the room. I’m not sure if he’s drawn in by the action or if he’s merely freshening his cocktail glass. Every time I move to talk to him, he’s already gone.

The crowd sings “Happy Birthday” once again, this time while Princess Donna is on her knees. She’s sucking off James Deen, and the audience’s song provides a countdown for his, er, gift to the birthday girl.

The party, for lack of better words, is now coming to close. The audience has dissipated to a small number of die-hard voyeurs.

The shoot wraps around 11. The cast and crew lead a round of applause as Princess Donna thanks her subs.

James Deen walks toward the green room to fetch his robe. A fan stops him short, praising his performance tonight. The fan sticks out his hand. Without missing a beat, James offers up his elbow. We actually all know where that hand has been.