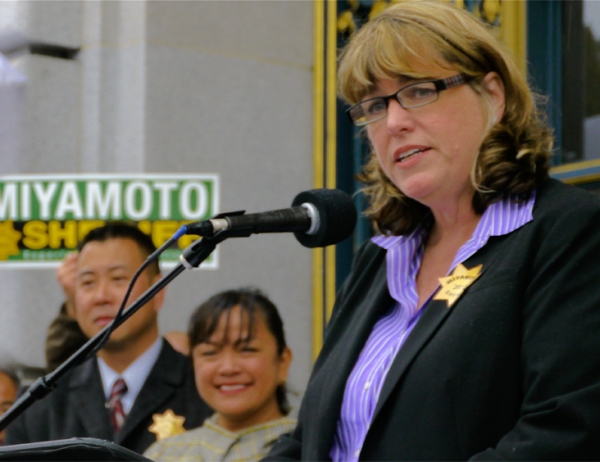 Following the serving of papers to Mirkarimi’s new attorney, David P. Waggoner, notifying him of the suspension earlier today, Vicki Hennessy was sworn in as interim sheriff by Mayor Ed Lee this afternoon.

Lee announced Tuesday that he was going to suspend Mirkarimi on official misconduct charges, which will prompt a hearing by the city’s Ethics Commission and then a decision by the Board of Supervisors, which will need nine votes from the 11-member board to oust Mirkarimi from office.

Mirkarimi, 50, pleaded guilty last week to misdemeanor false imprisonment in connection with a Dec. 31 incident in which he grabbed his wife’s arm during an argument, causing a bruise.

He was sentenced on Monday to three years’ probation, 100 hours of community service, 52 weeks of domestic violence counseling and other penalties.

Later Monday, Mirkarimi met with Lee, who asked him to resign or face suspension.

Mirkarimi refused to resign, holding a news conference Tuesday outside the sheriff’s department in which he said, “I do not believe that the conduct that I have taken responsibility for constitutes official misconduct within the meaning of the law.”

However, the written charges filed by the city attorney’s office against Mirkarimi with the Ethics Commission and Board of Supervisors argue that his actions do constitute official misconduct, which is partially defined in the city charter as “conduct that falls below the standard of decency, good faith and right action impliedly required of all public officers.”

Another part of the definition of official misconduct in the city charter is “any wrongful behavior by a public officer in relation to the duties of his or her office,” which the city attorney’s office argued also relates to Mirkarimi’s case.

Among the arguments by the city attorney is that the false imprisonment charge he pleaded guilty to conflicts with his ability to oversee the city’s jails and his ability to interact with the city’s adult probation department is compromised since he is currently on probation.

Waggoner was not immediately available to comment on the city attorney’s filing.

After Mirkarimi was officially suspended, Lee swore Hennessy in as interim sheriff in a ceremony at the mayor’s office this afternoon.

Lee said, “I trust her, I know her, I know that she will be a great leader for the sheriff’s department.”

Hennessy said, “This was a difficult time for the city … this is not necessarily a celebration for me becoming the sheriff but it’s me agreeing to be the sheriff so we can get the work done.”

Hennessy is the first female to lead the San Francisco Sheriff’s Department. She had retired in 2011 after previously serving as chief deputy of the department and as executive director of the city’s Department of Emergency Management.

Hennessy is not related to former Sheriff Mike Hennessey, who served as sheriff for 32 years before retiring last year, although Lee accidentally spelled Vicki’s last name as Hennessey in a letter included in the city attorney’s written charges.

Hayes-White said Hennessy “has a lot of credibility” because of her 30-plus years in law enforcement.

Hennessy said she planned on getting right to work this afternoon by meeting with her staff and setting agendas for the next few days.

San Francisco Deputy Sheriffs Association President Don Wilson, who said earlier this week that morale within the department had been affected by the Mirkarimi case, said in a statement today, “We look forward to working closely with the new sheriff to continue our work protecting the citizens of San Francisco.”

As for Mirkarimi, he will face the public hearing by the Ethics Commission, which will take place at least five days from today. The commission will then transmit the full record to the Board of Supervisors, which will decide Mirkarimi’s fate.

Mirkarimi served on the board for seven years before being elected sheriff last November.

Mirkarimi will also return to the San Francisco Hall of Justice on Thursday afternoon for an hour-long probation orientation meeting, according to district attorney’s office spokesman Omid Talai.

He will be joined by several other people convicted of domestic violence-related offenses at the orientation, Talai said.