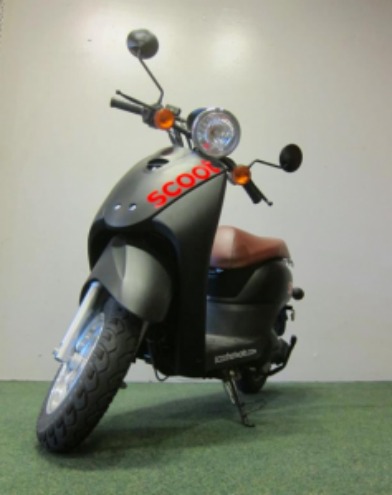 A moped-sharing startup planned for San Francisco has attracted big investments and glowing tech-industry press — but the road to scooter sharing might be a bumpy one, as an aspect of California’s licensing laws could create challenges for the still embryonic company.

According to Angel List, startup accelerator Greenstart was the company’s “incubator,” joining investor Justin Dawe in providing backing for the company.

Scoot Networks CEO Michael Keating tells the Appeal that the company currently has “a handful of scooters in operation” and about ten people testing the service, but is getting “a bunch more this week.”

As for pricing, Keating emphasizes that “we are very much in the beginning…and are still trying to find out what works for people.”

“Right now, we are thinking about pricing plans that are very competitive with public transit, for people who want to ride a lot, sort of a subscription, that would be an unlimited plan, where you could ride all the time and it would be really cheap, almost as cheap as Muni,” Keating said. Other riders, who might use the service less, would pay rates competitive to those of taxis, Keating said.

Coverage of the company on Fast Company’s website asserted that “riding a rented scooters (sic) doesn’t require any special certification,” a similar article on Wired’s site says that “the scooters max out at 30 mph, negating the need for a motorcycle license,” and yet another piece on GigaOm says Scoot Networks’ rides are “low-power enough that the driver doesn’t need a motorcycle license.”

Keating tells the Appeal that it’s the California Department of Motor Vehicle’s laws around rentals that keep Scoot Networks’ riders from having to go through the usual $31 application fee, motorcycle learner’s permit (that means no night driving), written test, and either a driving test (administered at the DMV) or proof that you completed California Motorcyclist Safety Program to get the M2 license required for scooter drivers in California.

Keating referred me to CVC?? 12804.9 (h), which says that people with regular drivers’ licenses can rent a vehicle “for up to 48 hours. It’s a function of the vehicle not being very powerful…it’s in the same regulatory category as a moped,” he said.

Referring me to the DMV’s page Motorcycles, Mopeds and Scooters Defined, Gonzalez confirmed after looking at the aforementioned coverage on Scoot Networks that the electric scooters used by the company “would require an M2 endorsement,” that is, a license that would allow a rider to “operate any motorized bicycle or moped or any bicycle with an attached motor,” per the DMV.

And it’s not just the DMV: “California Highway Patrol (CHP) agrees with DMV’s position that these scooters would require an M2 endorsement, pursuant to California Vehicle Code ??406 (a),” Gonzalez said.

Keating hastened to note that, unlike Zipcar, however, “there is a big face to face interaction when you first come to ride…we need to make sure you feel comfortable riding the vehicle, and can do so safely.”

For users without motorcycle licenses — and Keating acknowledges that most people dont — “we meet you at the vehicle, we show you how to use it, and we usually go on your first ride with you.”

When told about the DMV and CHP’s take on licensing laws as applied to Scoot Networks, Keating said that he’d had trouble getting a clear picture of the rules, saying that most officials he spoke with said to “ask your dealership.”

“The feedback we got was really ambiguous. We talked to the DMV, we had an attorney look into it…we had a Sacramento-based transportation consultant look into it. This is letter of California vehicle code, not someone at the DMV who thinks they know what the rules are,” Keating said.

“It would be a real pity if this thing got squelched because some kind of mid-level CHP thought that this didn’t meet his or her idea of how California vehicle code should be enforced,” Keating said.

Will Scoot be squelched before it can even begin? The DMV’s Gonzalez seemed hopeful that if the agency could speak with Scoot Networks, perhaps they could find a way to “get the company in compliance,” she said.

Keating also appears eager for his company to be in compliance with the rules, saying that “we don’t have anyone on the full subscription model right now, and if we do, we’d like to help them get their M2.”

“This business is grounded in making this city a better place to live.”