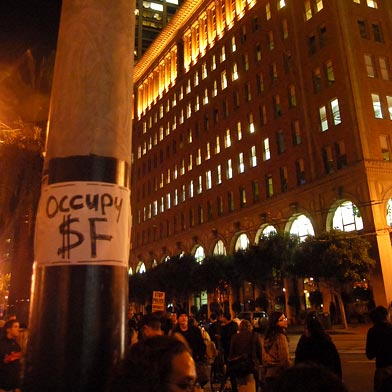 A man was arrested in San Francisco on Thursday morning after returning to the Occupy SF encampment where he allegedly stabbed someone on Sunday, a police spokesman said.

The man, whose name was not immediately released but whom the Ex identifies as “Chris,” was arrested at 10:58 a.m. outside 101 Market St., where “reoccupiers” have been stationed in front of the Federal Reserve Bank of San Francisco since last month, police spokesman Sgt. Mike Andraychak told Bay City News.

SF Occupier Brian “Boston” Reid, 28 was stabbed in the chest at about 10:40 p.m. Sunday at the encampment. He was taken to San Francisco General Hospital to be treated for his injuries. As of Friday afternoon, he remains hospitalized in non-life threatening status, says Andraychak.

According to an email sent by Occupy SF media, Thursday afternoon US Army veteran and SF Occupier Nick Anthony Shaw recognized and “physically contained” the suspect.

Shaw tells the Ex that the suspect “read in the paper that he might have killed somebody…he tried to run, and I put him in a headlock until the cops got here.”

Shaw later filed a report at the police department, according to Occupy SF.

According to Andraychak, the suspect, a 22 year old, male, El Paso, Texas resident, is not being named at present as they “are identification matters pending with witnesses.”

He was charged with one count of attempted murder and remains in custody.

The stabbing was one of two outside 101 Market St. in the past week.

Another Occupy member was stabbed on Monday night at the encampment. He was hospitalized but is expected to survive, police said.

The suspect in Monday’s stabbing was described as a white man between 30 and 40 years old who is about 5 feet 11 inches tall with a thin build. He was last seen fleeing into a nearby BART station, according to police.

Anyone with information about either stabbing is encouraged to call the Police Department’s anonymous tip line at (415) 575-4444 or send a tip by text message to TIP411.

Dan McMenamin of Bay City News contributed to this report