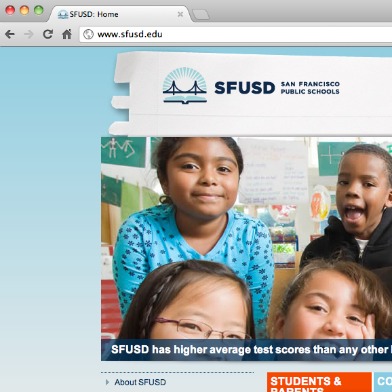 San Francisco Unified School District’s website has received an award from a national nonprofit that honors the most transparent government websites in the country, district officials said today.

The district’s website was one of 214 nationwide to be named today as 2012 Sunny Award recipients from Sunshine Review, an organization dedicated to government transparency.

The website received an A- grade from the group, with the only demerit coming for a lack of local tax information.

Editors from the nonprofit analyzed more than 6,000 government websites, grading them on a 10-point checklist that took into account the availability of information about each organization’s elected officials, budget and other public records.

Among 110 California school district websites that the organization evaluated, San Francisco’s was the only one in the state to earn the award, district officials said.

The district’s website, sfusd.edu, was redesigned and launched in the spring of 2011 with the assistance of grant funding. The site is multilingual and receives an average of 100,000 unique visitors each month, according to district officials.

“One of our goals for the website is to be transparent and to make relevant information easily accessible to parents and community members,” district spokeswoman Gentle Blythe said in a statement.

“This award is a great honor and the Sunshine Review’s checklist will help the district to improve the site even more,” Blythe said.

San Francisco’s city website, sfgov.org, also received an A- grade from Sunshine Review after receiving a perfect score in the 2011 awards.

The group said it downgraded the city’s site because did not disclose information about membership in taxpayer-funded lobbying associations.

More information about the Sunny Awards can be found here.