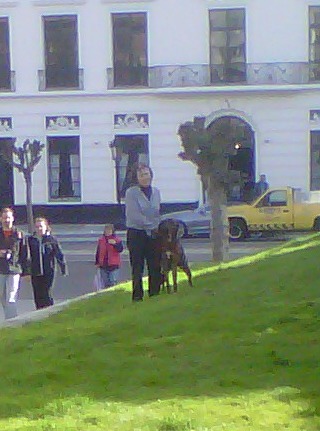 After an unprovoked attack by a far larger dog left a poodle dead, the deceased pup’s guardian was left grieving and seeking justice for her animal. But contradictory remarks she says were made to her by an SFPD officer specializing in animal investigations have left her disappointed and frustrated.

As the Ex reports, Kim Ferguson, 45, took her 12-pound poodle, Dijon, to Huntington Park in Nob Hill on February 26.

As with most parks in San Francisco, dogs are required to be kept on-leash at Huntington Park.

The guardian of the dog that allegedly attacked Dijon fled the scene, says Ferguson, though, SF Weekly reports, Ferguson took a cell phone picture of what she says is the alleged attacker and guardian, which you can see to the right.

It appears SFPD is taking a laid back approach to the case — according to the Ex, Officer John Denny of SFPD’s Vicious and Dangerous Animals Unit “said he hopes the owner will come forward.”

Calling the attack “a tragic accident,” Denny told the Ex that “it’s extremely rare for a dog to be put down after one such attack.”

Ferguson, who tells the Weekly she “was hoping that the dog would be put down for such a vicious attack” was “disappointed” by Denny’s remarks to the Ex.

She says she got a far different story from Denny, telling the Weekly that Denny “said the dog would be put down. That’s what he told me.”

“Any member of the public may request a Vicious and Dangerous Dog Hearing,” they say, by filling out this form.

If Ferguson’s photo of dog and guardian looks familiar to you, or if you have any information on this case, Denny can be reached at John.Denny@sfgov.org or 415 554-9213.

Photo of the dog that allegedly attacked and killed Dijon: Kim Ferguson, via SF Weekly