The SF Zoo Welcomes Some Loud And Endangered Lemurs 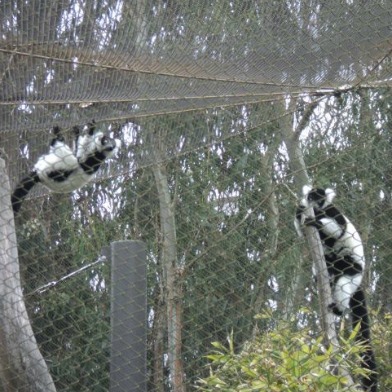 The SF Zoo is welcoming a few new residents this week, some black and white ruffed lemurs, known as the “more endangered of the two species of ruffed lemurs.”

The black and white ruffed lemur is native to an area in the eastern rainforests of Madagascar, but the Zoo’s “new boys” were born at the Sacramento Zoo “who needed to find them a home and we needed more lemurs,” the Zoo announced on their Facebook page.

According to the Zoo, “the black and white ruffed lemur is listed as endangered by the USDI (1980) and is on Appendix I of CITES.”

According to Wild Madagascar, they are “widely hunted over their range and only exist in low population densities. They also suffer from habitat loss.”

Our lemurs’ new habitat, however, is the SF Zoo’s Lipman Family Lemur Forest, which the Zoo says is “the largest outdoor lemur habitat in the country.”

But be warned before you visit: the Zoo says these new lemurs “make very dramatic sounds.”

“The most characteristic calls are an intense roar of alarm and a powerful plaintive-sounding call for territorial expression, followed by loud, rather birdlike clucks.”

According to the Zoo, the lemurs are most vocal between 5 and 7 PM, so plan your visit accordingly.