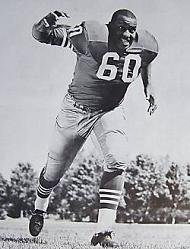 A former San Francisco 49ers defensive lineman has passed away, according to team officials.

Lakes was drafted by the 49ers in the second round of the 1961 NFL Draft when he was 21 years old. He had previously played defensive tackle at Wichita State University in Kansas.

He played for San Francisco for 10 seasons and is part of the team’s 10-Year-Club. He played one season with the New York Giants before retiring in 1971, officials said.

After his football years, Lakes worked as a consultant in San Pablo. He was born in Vicksburg, Miss.