Over the next two weekends, Gretchen Garnett & Dancers, Aura Fischbeck Dance, and The Riley Project present new contemporary dance works in their collaborative evening, “Wish You Were Here” at The Garage in SOMA. Through The Garage’s resident artist workshop (RAW), the choreographers and their dancers have spent the past 12 weeks creating new movement that deals with solitude, intimacy, and the body as it serves as a vessel for our past experiences.

I spoke with Gretchen Garnett, who exudes a fresh, intuitive, and thoughtful presence, about her RAW experience. Garnett moved to the Bay Area in 2005 and has been active in choreography, performing, and teaching. With a strong background in dance, Garnett has appreciated the opportunities here in San Francisco for dancer/choreographers like herself. And she credits Joe Landini, director of The Garage, with helping her grow as a dancemaker. “There’s really no other place like [The Garage] here in San Francisco.”

I asked Garnett to tell me, in broad strokes, about the piece. She jumped right in, saying, “You’ve been to The Garage, right? It’s a fairly… compact space.”

Garnett decided to tackle the performance space itself, investigating how constrained spaces impact us and how we’re affected by and perceive the array of space around us.

In her work, “Activities for Tight Spaces,” she compresses the “stage”: the audience sits in a tight rectangle of shoulder-to-shoulder chairs, and the dancers move within and outside of them. While there’s legroom, the space between audience member and dancer blurs, and your perspective shifts from separate, comfy seatgoer to in-the-moment potential accomplice. 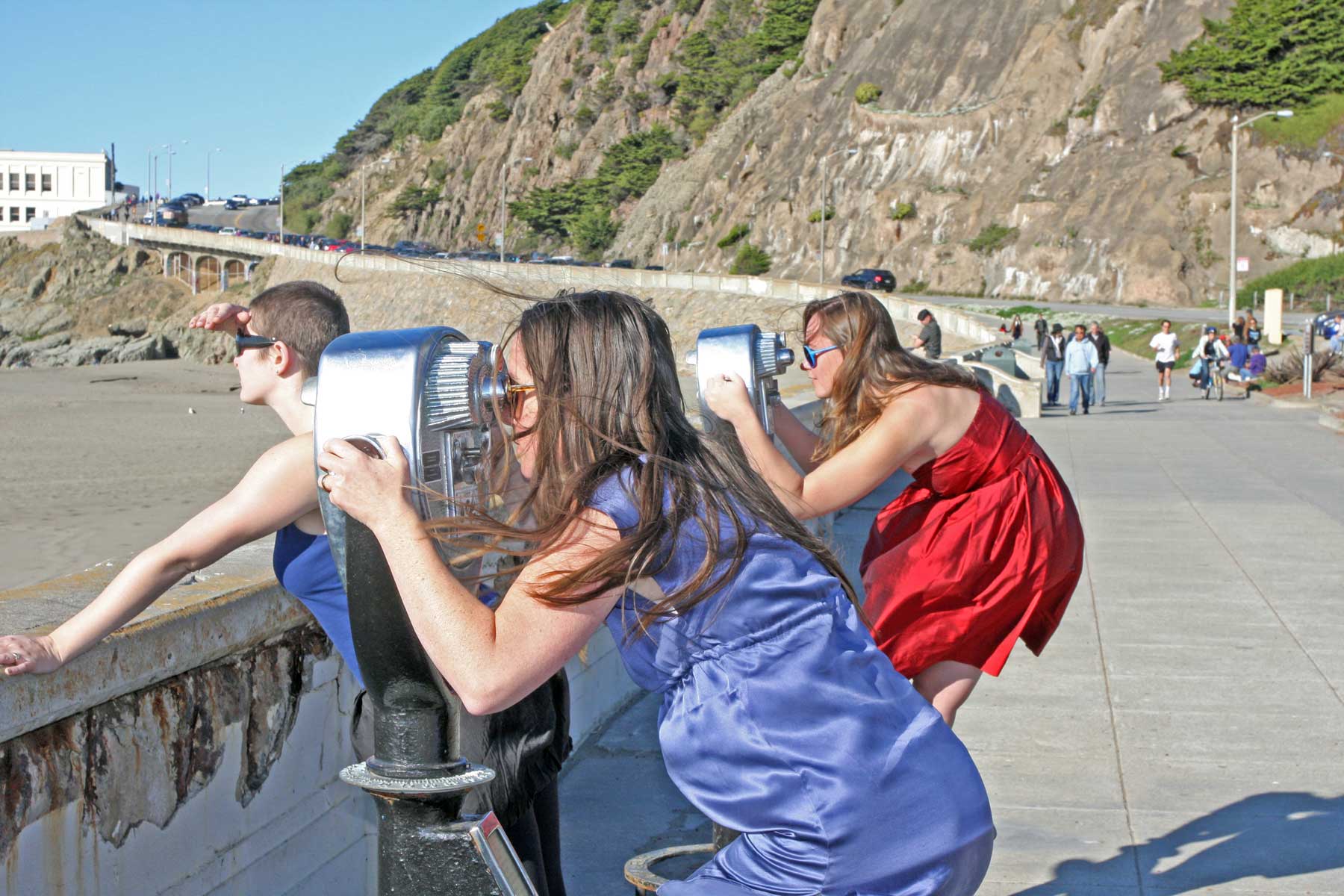 Gretchen Garnett, Aura Fischbeck, and Leigh Riley; choreographers presenting new works in “Wish You Were Here” at The Garage. Photo by C. Wise.

In creating the movement, Garnett says, “Most of the movement in the piece was created through images of (and actual) spatial limitations. For example I created a phrase in a very small corner of my apartment and experimented with how big I could possibly move in that space. We also created movement that was based on imagined spatial or physical limitations –being in a straight jacket or a sleeping bag or in the trunk of a car–both how it would feel physically and how we would react to being in these different situations.”

Garnett also expanded upon the idea of claustrophobia and how we perceive the space surrounding us.

“Personally, I have a pretty strong reaction to tight spaces and being physically constrained, and I think that this perceived concept of space has come across in the tone of the piece. There is tension and struggle and by putting the audience so close to the dancers I am trying to bring out these same feelings in those who watch or participate in the piece.”

She also expanded this containment to include flesh colored tube tops constructed of stretchy fabric. The tops stretch out, becoming tunics and dresses, womb-like in their comforting collapsibility and constrictions.

The idea of limits and whether they actually cause you to pare down or simply rearrange your thoughts and ideas rises to the top of this work. Garnett comments, “In terms of how it has changed the way I look a spaces, the process has definitely changed my idea of how much you can actually do in a small space. I started this piece wondering how I was going to get three dancers to dance expressively and fully within these spatial constraints and now I’m wishing that I had pushed it even more: added more dancers or made the space even smaller. When we started rehearsing the dancers were concerned about how much they could really do and now they don’t let the space hold them in and that’s been exciting to watch.”

While Garnett and her husband are relocating to a still-to-be-determined city/state this summer, she doesn’t want this to be the end of her exploration into limits and boundaries. Garnett believes that “Activities for Tight Spaces” may be the jumping-off point for a new vein of work for her, and this initial research has motivated her to continue digger deeper, even if it’s elsewhere.