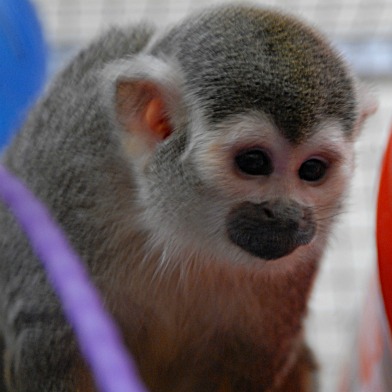 Banana Sam, the squirrel monkey that made headlines when he was stolen from the San Francisco Zoo at the end of December and was later returned, will be back on exhibit starting Saturday.

Zoo visitors who bring a valentine for Banana Sam get $1 off admission all weekend, and Banana Sam’s keepers will give talks at 11:30 a.m. and 2:30 p.m. on Saturday and Sunday.

Zookeepers discovered the 17-year-old monkey missing from his enclosure the morning of Dec. 30. Someone had breached a perimeter gate overnight, climbed onto the roof of the squirrel monkey exhibit, and cut two holes into the mesh there.

An investigation was launched and a $5,000 reward was offered, and the next day, a man came forward with the monkey, claiming to have found Banana Sam in San Francisco’s Stern Grove.

The man told police he had lured the monkey into his backpack.

Police are checking out the man’s story and continuing to investigate the disappearance. In the meantime, the reward money is being withheld.