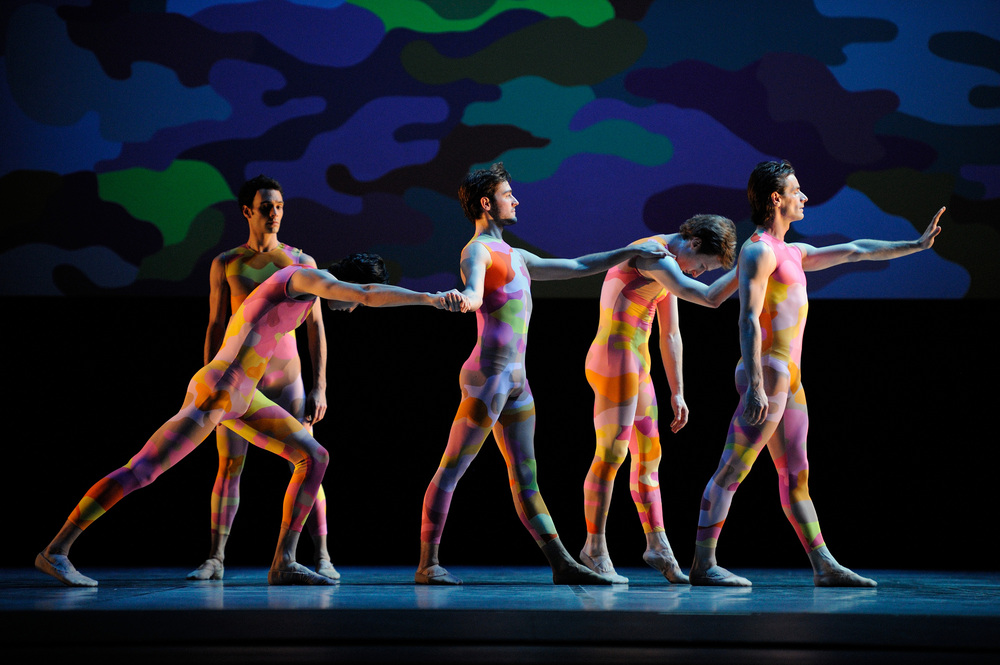 San Francisco Ballet has packed its second program of the season with a wallop of athletic dance. Opening Wednesday’s program, Wayne McGregor‘s “Chroma” still causes my heart to stir and jump like we were on our first date. With Jack White’s and Joby Talbot’s orchestral rave of heart-beating pounds, clomps, and tinkles roaring onwards from the pit, “Chroma” creates an onstage gamechanger, one where you wonder just what happens when the party finally ends.

McGregor’s movement doesn’t have a firm beginning or an end, but instead radiates outward, upward, and beyond from each dancer’s pelvis as if fireflies were bursting out and fluttering about the stage. This is ballet free of constraints or tradition, dance that is revving full speed ahead until it can’t go anymore. Yet even with jaw-dropping splits and ooh-inducing lifts, the 10 dancers find moments of nuance, breath, and pause, places where the almost-stillness becomes a thing of wonder and glory. Vito Mazzeo and Sofiane Sylve happened upon one early on when she jumped into his arms and hung there, relishing in his secure, strong grasp. What a wonderful moment.

Corps de ballet member Koto Ishihara made her “Chroma” debut this Wednesday evening, and I look forward to seeing more of this petite spitfire. Chroma’s set, lighting, and costume design are minimal yet allow the movement to shine, and that’s where this ballet’s heart and soul lies.

In contrast, Christopher Wheeldon‘s “Number Nine” returns for a second season, and it jumps out of the block full steam ahead with 16-member corps and eight leads who are dressed ready for a 1950s water ballet. Wheeldon’s craft has developed over the years. From his early creations, it was evident that he could create an intricate duet in his sleep, but “Number Nine” proves that he’s become quite adept with large groups, using them for more than simple filler. Dressed in sunny yellow, the corps pick up themes from the principal couples and develop them into brightly detailed patterns. The piece may veer towards fluff, but it’s well crafted fluff. And that’s the best kind.

Mark Morris‘ “Beaux” premiered on the program as well. Other critics have applauded it, but I just can’t.

I do, though, applaud the dancers–they were great. Morris started with a great premise: feature the company’s men and do it outside of the normal ballet boundaries. Let the men partner each other, hold hands, and dance beyond conventional ballet. But his “boundary pushing” choreography collapsed instead of exploding.

Morris is known for his witty, smart dances, ones that feature inventive patterns, folk inspiration, and smarts. When I think of Mark Morris, I think of an intelligent, creative choreographer. What he delivered this week, though, is an entirely different mucked-up thing. The opening presents us with a giant Barbie-fied camo print, compliments of Isaac Mizrahi (who also designed the costumes), across the back wall. The nine men stand tall with arms raised in a high V and their very toned backsides toward the audience.

But throughout most of the work, “Beaux” appears polite and safe. The dancers move across the stage in solos and small groups, but Beaux’s structure and actual development lack any support to propel this farther than nice. Garen Scribner is partnered reminiscent of the lead girl in Balanchine’s “Rubies.” Pierre-François Vilanoba put his hands on his hips and cocks his head with its gorgeous locks to the side, as if too cool for this joint. But nothing real or meaty come to fruition until the end.

Luckily, Morris got things back on track, most of the men dance solos. The steps turn hokey on its head, and highlight each dancer’s strengths (Lonnie Weeks! He moves with cat-like grace and connects even the most awkward shapes with speed and polish.) so why the earlier drivel? Morris, this one needs a re-do.