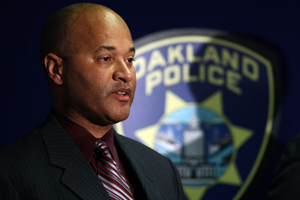 Quan had tapped Jordan to act as interim chief in October after former police Chief Anthony Batts abruptly resigned, citing reasons including that he had limited control but full accountability for the city’s high crime rate.

Jordan has with the department for more than two decades, serving as a patrol officer for 10 years and a field supervisor for 13. He served on the department’s SWAT team for seven years.

Since he was named interim chief, Jordan has grappled with issues including violent crime, budget constraints and the question of how to handle the recurring Occupy Oakland protests.

Jordan had served as interim chief once previously, being named to the post in February 2009 after former Chief Wayne Tucker retired. After Batts took over in August 2009, Jordan served as assistant chief.