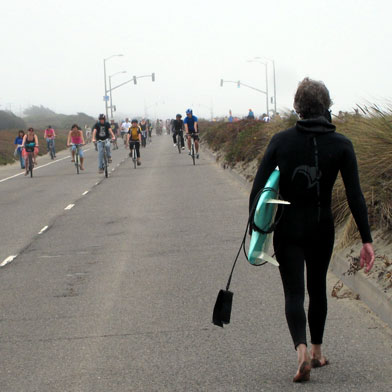 Since 2008, San Francisco has celebrated “movement without motors,” closing down streets for pedestrians, bicyclists, and creating a recreation space on some of the biggest roads in the city in an event known as Sunday Streets.

In a press release sent Wednesday, Mayor Lee’s office excitedly announces that this season will be the largest to date.

Says Lee, “We look forward to returning to Chinatown, doing a more frequent Mission route, and adding a new route in the Southwest neighborhoods of our City to bring the benefits of Sunday Streets to more San Francisco neighborhoods.”

This year’s car-less event kicks off Sunday, March 11th along the Embarcadero. Here’s the rest of the schedule, which the Mayor’s office warns us is “subject to change”:

“Sunday Streets not only showcases San Francisco’s commitment to sustainability and innovation, it is a proven cost-effective way to better health for San Franciscans. We’re committed to ensuring the program’s continued growth and success in 2012 and beyond,” says Lee.

As the Chron points out, Sunday Streets “relies heavily on volunteers to pull it off.” If you want to be one of those volunteers, learn more on how to help here.