Laughing at the Male Gaze: Body Awareness At The Aurora Theatre 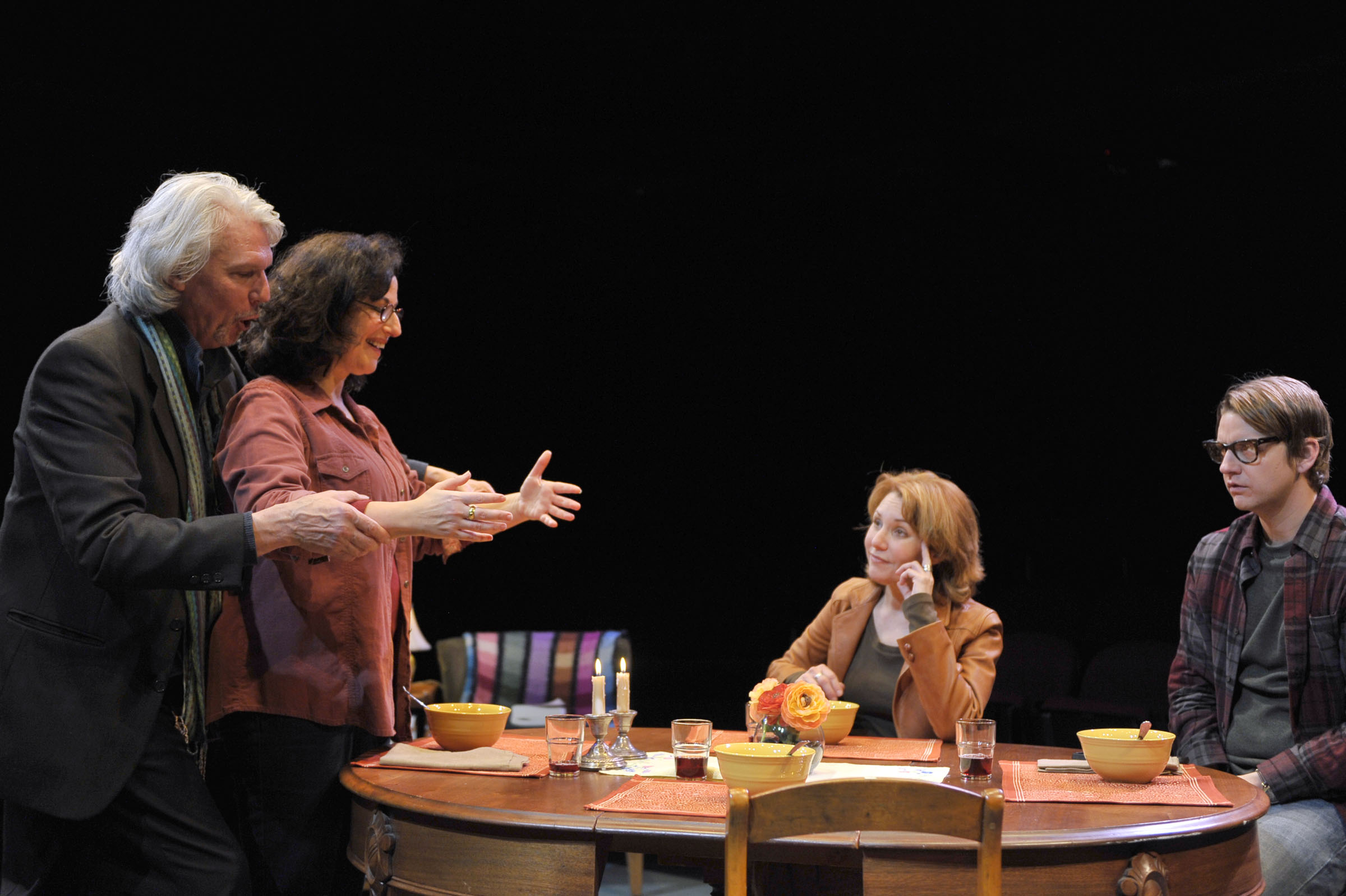 “Penises are ugly,” blurts Jared (Patrick Russell), unhappily voicing his apprehensions about sex to Phyllis, a psychology professor and his mother’s girlfriend. “That is a common misconception,” she briskly replies.

The human body in the hands of intellectuals is a circumstance ripe for comedy, and Annie Baker’s Body Awareness nails it. It is “body awareness week” at the Vermont college where Phyllis teaches, and she, being the event coordinator, is flurrying about with a tomb of feminist literature tucked under her arm, decrying the ever oppressive “male gaze.”

Meanwhile at home, partner Joyce (Jeri Lynn Cohen), a high school teacher, is nudging her adult son Jared, an electric toothbrush-clutching, etymology and porn-obsessed autodidact, toward accepting that he has Asperger’s Syndrome. With the unique family’s pressure points thus circumscribed, we learn that they are awaiting a guest artist.

Enter Frank (Howard Swain), the artist/intruder: a female nude photographer, it turns out, whose every well-meaning gesture drips with a conventional sexism of which he is utterly unaware. A flute playing, ghost-seeing mystic to boot (“I don’t care for logic,” he smugly contends against Phyllis’ horrified academicism), this stringy-haired, superficially “deep” buffoon is equal parts lovable and creepily unsettling.

For Joyce and Jared, he also promises to be something more – for Joyce, a desperately needed source of attention, sexual and otherwise; for Jared, a father figure, the previous lack of which he hopes might prove the reason for his ineptitude with women, instead of the dreaded Asperger’s on which his mothers have been harping.

Clocking in at a snappy 90 minutes, Body Awareness is a true comedy, maintaining a certain threshold of levity despite its rather serious subject matter. Bits of tragedy do perspire from the turns of defensive cruelty with which the three family members treat one another, Phyllis’ imploring glances to her partner that go unreturned, Joyce’s humiliation and the troubling manifestations of Jared’s condition. In the end, though, while matters stand far from resolved, the play manages a therapeutic exhale; the character’s have all made personal progress, not too much irreversible damage has been done, things will be alright.

A less tragedy-averse production might have delved deeper into the issues at hand – the difficulties in building a “normal” family around a homosexual relationship, the spectrum of mental illness, etc. Humor, though, might actually be the more progressive tool here. A duster rather than a trowel, it displaces the surface level in such a way that the deeper implications come into focus after a few days of simmering, without overriding the sheer, widely appealing funniness of the scenes at hand. And in funniness, there is hope.