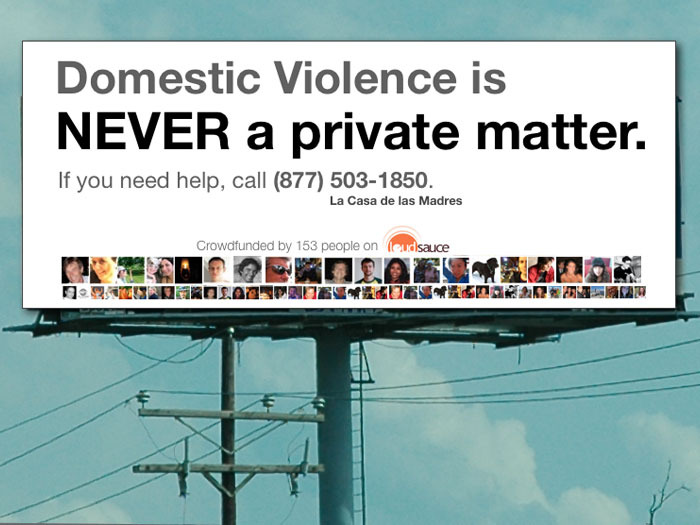 La Casa de las Madres, which runs a shelter for domestic violence victims, has exceeded the $4,000 it needed to raise for the billboard, which will be placed some time next week at 10th and Harrison streets in the city’s South of Market neighborhood, said Katharine Berg, the organization’s associate director.

Berg said the billboard, which will run for two weeks, is being put up because of the case of Mirkarimi, who is accused of grabbing and bruising the arm of his wife, Eliana Lopez, during a Dec. 31 argument.

The message on the billboard will say “Domestic Violence is NEVER a private matter. If you need help, call (877) 503-1850,” a reference to statements Mirkarimi made on the day of his swearing-in as sheriff on Jan. 8, when he called the case “a private matter, a family matter.”

Five days later, Mirkarimi was arrested and charged with misdemeanor domestic violence battery, child endangerment and dissuading a witness. The case is set to go to trial Feb. 24.

A total of 95 people had donated $4,025 to the campaign as of this afternoon, Berg said.

“That shows this is an important issue to a number of San Franciscans,” she said.

Mayor Ed Lee was asked about the billboard campaign earlier this week. Lee declined comment on its connection to the Mirkarimi case but said “La Casa is a very reputable organization … that I consider to be an expert” in domestic violence issues.

Berg said La Casa de las Madres is continuing to raise money for the campaign and could possibly use it to put up a second billboard in Spanish “to raise a voice for yet another segment of San Francisco’s survivors.”

The group is raising money in the campaign via a partnership with LoudSauce, a San Francisco-based startup that raises money via “crowdfunding” on the Internet and uses it to place advertisements in various media.