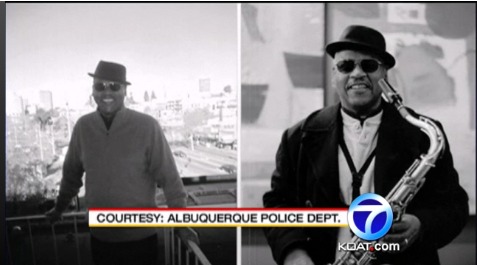 If you walk through the Embarcadero Station on your commute, you might have noticed it’s a little quieter these days. That’s because one of that station’s best-known buskers is headed out of state to face first degree murder charges in a 25-year-old case.

According to KRON4, Ronald Brewington, aka “The Jazzman,” is well known for playing the saxophone at Embarcadero BART.

But now he’s known for something else: according to police in Albuquerque, New Mexico, Brewington “vanished in 1987 after police said he shot and killed his wife, Diedre, in southwest Albuquerque,” KOAT7 reports.

Authorities picked up Brewington’s trail after, KOAT7 says, he was traveling cross-country on a bus with a woman who died while passing through Abeline, Texas.

Earlier this week, says Albuquerque police Chief Ray Schultz said, Brewington “was found at a BART station, he had a hat with money in it and he was on the side there playing the saxophone.”

“Our agency in San Francisco was contacted by the Albuquerque Police Department’s Cold Case unit on a tip that Brewington might be in the area. We were able to confirm the tip and track him. He was living here in the Bay Area and actually we were able to arrest him at the Embarcadero BART station where he was playing saxophone,” U.S. Marshall’s Service Deputy Joseph Palmer told KRON4.

According to the New Mexico Daily Lobo, Diedre Brewington was 37-years-old when her body was discovered on Aug. 4, 1987. She had reportedly separated from her husband, and was preparing to divorce him.

According to the U.S. Marshal’s service, the Bernalillo County grand jury indicted Brewington for first-degree murder and issued a bench warrant for his arrest, but he’d already fled.

He’s being held in federal custody as authorities arrange his return to New Mexico, KRQE reports.