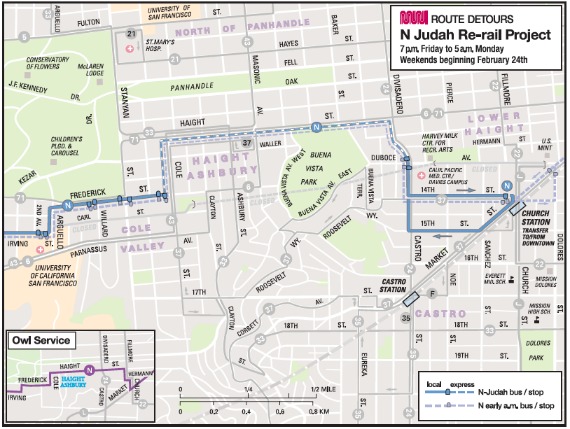 The SFMTA working on two major projects, which will mean the N Judah train will be replaced by shuttle buses following a detoured route, beginning tonight at 8 PM and continuing until 5 AM Monday. This is expected to be the first of several weekend shutdowns/detours as the construction projects continue.

The Church and Duboce Track and St. Improvement Project, which began last spring will improve the N’s tracks, while the Carl St. Rail Replacement Project will include sewer work for the Public Utilities Commission on the south side of Carl St. between Arguello Blvd. and Hillway Ave. and between Stanyan and Shrader St. and the replacement of a track crossover on Judah St. between 20th and 21st Ave.

As Greg Dewar puts it, “This is like our N having a combination wisdom teeth pulling, a root canal, and other painful dental work all at once – it sucks when it happens but when it’s done, you don’t have to worry about it again for some time.”

As part of the sucking when it happens, N Judah shuttle buses will operate all weekend between Ocean Beach and Church St. instead of the usual train.

The N bus will follow the regular N Line route from La Playa to Arguello, with subsequent stops east of Arguello being rerouted around construction. The N Owl bus will also be rerouted from Carl St. onto Frederick St. You can see both routes in the map above.

Traffic control officers and SFPD will direct traffic at “critical” intersections, as the SFMTA has stated in a press release.

You should note that street parking will be unavailable in and around construction sites. There will also be parking removal on Frederick St. at Cole and Stanyan thanks to temporary bus stops being set up. SFMTA ambassadors will be in the area for rider assistance.

SFMTA plans to end their construction period on these two projects next year. In addition to individual line shutdowns on weekends, subsequent partial closures will occur on the J Church and N Judah lines beginning Friday, May 25th starting at 8pm and ending at 5am on Monday, June 4th.