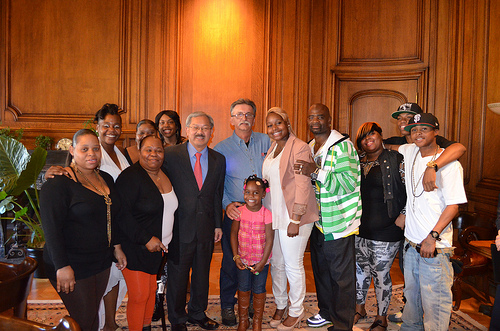 A woman who pulled an unconscious big-rig driver to safety from a fiery crash on U.S. Highway 101 in San Francisco last October is once again being honored for her heroism.

Williams was driving her 5-year-old daughter to school when she saw the crash happen in her rear-view mirror. She then saw Finerty get out of the truck and pass out on the ground as spilled fuel caught fire nearby.

She stopped her car, ran over to Finerty and dragged him to safety. Emergency responders had arrived at the crash site from the north and did not initially see Finerty when they were looking for victims.

Thanks to Williams’ quick actions, Finerty suffered only minor injuries.

Both Williams and Finerty were scheduled to attend a 9 a.m. ceremony today at the offices of Heroic Imagination Project, a nonprofit in San Francisco’s Presidio that seeks to disseminate and apply knowledge on the subject of heroism.

She also received a good Samaritan award from San Francisco Mayor Ed Lee in the days after the crash.