Car That Was Driven Into Pacific Retrieved From Ocean Beach 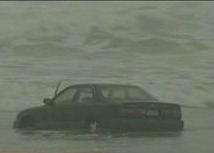 A car that somehow ended up in the waters of Ocean Beach this morning has been removed from the beach, a National Park Service official said tonight.

Firefighters responded at 6:24 a.m. to a report of a vehicle in the water near the Beach Chalet restaurant at 1000 Great Highway, a fire dispatcher said.

The Chron quotes fire Capt. Jeanne Seyler as saying the driver used the ramp near Lincoln, “and managed to drive across 350 feet of sand before coming to a stop in the surf.”

According to ABC7, what followed was “a dramatic rescue” of the female driver of the car, a Lexus E350 sedan.

According to the Chron, the woman was sitting in the “partially submerged” car as rescuers arrived.

“Rescuers feared there might have been someone else in the car, but the driver was able to tell them that she was alone,” they report.

According to the fire dispatcher, the accident victim was taken to a hospital. She said she did not have more information about the victim or possible injuries.

The woman’s name has not been released. According to the Chron, the car is registered to a 42-year-old SF woman, but it hasn’t been confirmed that that is who was driving the car.

The San Francisco Fire Department said it was treating the incident as a suicide attempt, CBS5 is reporting.

National Park Service spokesman George Durgerian said he could not provide additional information about the incident this morning because investigators were still trying to figure out how the car ended up in the water.

Sgt. Scott Huther of the U.S. Park Police told Ocean Beach Bulletin “he wasn’t sure how the car would be removed from the beach, or who would have to pay for it.”

But apparently, they found a way, as Park police waited until the tide went down before retrieving it from the water, the fire dispatcher said.