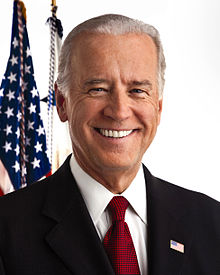 The Giants are going all the way!

That sentiment would draw cheers in San Francisco during baseball season, but drew jeers when Vice President Joe Biden mixed up the city’s baseball and football teams during a campaign event this afternoon.

Biden, speaking at an event in San Francisco’s Financial District in support of President Obama’s re-election, told supporters that “the Giants are on their way to the Super Bowl,” according to media reports.

The New York Giants are facing the San Francisco 49ers in the NFC Championship game at Candlestick Park on Sunday.

When the comment drew boos from the crowd, Biden quickly apologized, saying he was used to talking about the San Francisco Giants’ baseball victories, then clarified that he meant to say “49ers.”

The campaign event was one of a handful of stops Biden and his wife are making in the Bay Area today.

This evening, the vice president plans to meet with several local tech leaders, including the heads of Apple, Google, Yahoo, Netflix and Zynga.

He is scheduled to spend the night in San Francisco before traveling to Reno and Los Angeles on Thursday.