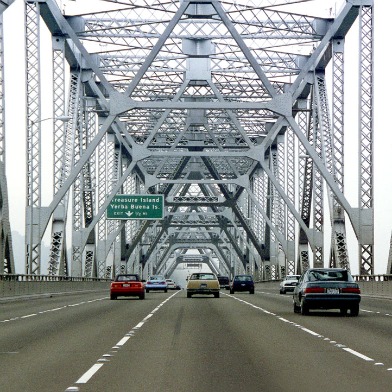 The upper deck of the Bay Bridge will be closed over Presidents Day weekend to make way for construction, bridge officials announced today.

The weather-dependent closure will allow crews to create a detour that bridge officials say will enable the bridge’s new eastern span to open to traffic months ahead of schedule.

The upper deck, which carries westbound traffic, will be closed from 8 p.m. on Friday, Feb. 17, to 5 a.m. Tuesday, Feb. 21, bridge officials announced today.

On the approach to the span on the Oakland side, the bridge’s current westbound lanes stand in the path of where the new eastern span’s eastbound lanes will be.

The detour will shift westbound traffic to the south of its existing path, and will make room for construction crews to demolish sections of the existing roadway that are in the path of the new incline section.

A video explanation of the new configuration is available online at www.baybridgeinfo.org.

During the closure, motorists will be encouraged to take alternate routes or transit, which will be beefed up with additional ferries and overnight BART service at some stations.

Those who drive should allow extra travel time, even if traveling on other bridges, bridge officials said.