The Sexual Manifesto: On the Other Side of the Peep Show Glass 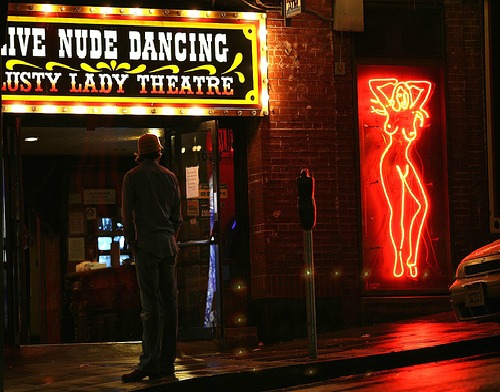 You’re buzzed in through the employee entrance. You snake your way along a thin corridor that makes you feel as if you’re backstage at a circus or on your way to the trap door beneath a fog-filled stage. That’s probably not too far from the truth. You’re at the Lusty Lady, a unionized peep show cooperative, and you’re about to audition.

A peep show is sorta like a strip club–if strip clubs had fap closets and glass between the patron and performer. Here, the performer is already naked. You put a dollar in to open a window and bam!: a room of three or four naked ladies “dancing.” The Lusty Lady has a Private Pleasures booth where–again, separated by glass–the patron pays the performer for a show, some roleplay, or a conversation. Some performers never work the booth, but everyone works the mainstage.

You’re not the only woman waiting backstage either. You size up the other two hopefuls: white, moderately attractive, middle class, possibly college students. They look disappointingly normal, down to the (ironically?) bad tattoos on the hipster. It smells like a co-op in here: the odor of entirely too many human bodies and not enough deep steam cleaning.

The madam pulls up your application. Yes, there’s an application for a job that involves you swaying and gyrating for four-hour shifts. Yes, she’s actually called the madam.

She’s well-spoken and comfortable and has that don’t-take-no-shit-attitude that convinces you she’s been there for a while. She’s also younger than what you’d assume for a madam, but then again, the only madam you’ve ever seen was in a documentary about the Chicken Ranch.

She tells you to get dressed, pointing to the dressing room after she’s looked at your driver’s license and taken a picture of you. Do not be confused by this directive: by “get dressed” she actually means “get undressed.” Auditioners are not allowed to wear anything onstage except for a pair of high heels. (Performers, on the other hand, have earned the right to semi-modesty through accoutrements like striped socks and stockings and garter belts.)

Some women will audition in modest heels that look more appropriate for a bridesmaid than a sorta-stripper. But you, intent on proving your prowess in navigating the suddenly very difficult task of mere perambulation, you brought heels that make you a half-foot taller and a whole lot wobblier.

You announce your naked self to the madam, who leads you up a flight of stairs that sounds suspiciously like plywood with each clop of your heels. This is how you die, you momentarily think: naked, ankles shattered in (albeit) sexy shoes, and buried in the bowels of a business coated in a thin, stubborn film of semen.

She asks for your stage name. For your safety, you cannot use your real first name. Some women will pick the first name that pops into their heads, usually the name of their current frenemy. Some women have thought way too long about this, choosing a nom de nue like Nyx (goddess of the night) or even Magdelene. Others go for the obvious like Candy, Kitty, or something jewel-related. You briefly consider the ironic Chastity.

“Roxie,” you say, hoping that some boner-befitted patron will appreciate the nod to your favorite Police song.

Before the madam pulls back the stage curtain, she sprays the soles of your shoes with disinfectant and hands you a towel not unlike a gym towel. “This is Roxie,” she announces to the other three women in the room.

Welcome to the fishbowl. It’s a suffocatingly small oval, completely lined with mirrors, carpeted, and outfitted with a stripper pole (which you smartly avoid). A series of windows dot one stretch of the mirrors, and these will rise to reveal the patron on the other side. The other women in the fishbowl are current performers. They seem friendly enough (they are, for the most part, naked as well), but you are quite aware that they are there to observe and judge your performance.

You still have the gym towel in hand. Is this to mop up sweat as you gyrate to a few songs? Should you use it as a prop, pretending to be a sexy bullfighter? You are awkwardly swishing it around, and you realize these women are not seeing your sexy dance at its full potential. You discover that the towel is for floorwork: one performer lays her towel on the carpet and spreads her legs as if her gynecologist is on the other side of the window. You decide you will not need the towel. Also, you’re due for a Pap.

No one has really told you what sort of dancing is expected of you. You figure the electric slide is out, but what about shimmying? Is this the right venue to bootyclap? You settle on a hip-heavy sway, mimicking the other women as you smile at them, pretending to offer camaraderie when you’re really looking for some moves to steal .

A window opens with a tired mechanical whir. The women encourage you to “take this one,” whatever that means. You can see the man in fap closet #9: white, unassuming, eyes darting across the fishbowl and looking to settle on his body type of choice. You step in front of his window, smile, and wobble your wobbly bits. He looks bored, and his window quickly lowers to show you your reflection once again.

There are vertical handlebars alongside each window, and you watch as one performer grabs the bars, deftly raises a stilettoed foot to the wall, and air grinds in front of an open window. They did not teach this in high school jazz dance.

Maybe it’s the lulling warmth of the room or the loud music or the shine of lights and mirrors, but you grow comfortable being naked and on display. You approach windows on your own and are only slightly surprised to discover that the couple/handicapped fap closets (windows #3 and #11) show much, much more than the jerk of a shoulder attached to a busy forearm.

At one window is an elderly Chinese man. You pose for him: here are your boobs, here’s your ass. He is very clearly appreciating your rack. House rules say you’re not allowed to touch your genitals or anus on stage, but they don’t say anything about your boobs. You give them a jiggle. He begins to flick his tongue out, and you’re not sure if he’s imagining he’s licking your tits or if he wants you to do it for him. You squeeze them together. You can’t tell if this is sexy or funny, but you’re pretty sure it can’t be both because sexy comedy does not exist.

You find that you actually enjoy the lizard-tongued Chinese man because he is enjoying you. This is much better than the bored-looking man. You get lost in your boob dance until the madam comes back.

“Roxie,” she says, and it takes you a moment to realize she is talking to you.

You follow her back down the death stairs, and she deposits you in the dressing room. This time, when she tells you to get dressed, she really does mean “get dressed.”

Back in your street clothes, you talk for a bit about whether you enjoyed your time on stage. This is no “where do you see yourself in five years?” job interview, but it is very much an interview. The Lusty is legit.

Once it’s all over, she shows you to the employee door. You sneak past the closet doors, hoping that you don’t bump into the man you just jiggled your boobs for. Out in the open air, you glance up and down the street, checking for acquaintances who might ask what you were doing at a peep show or for Lusty regulars with a penchant for stalking. It’s midday, midweek–this stretch of North Beach is quiet.

When you’ve put several blocks between you and the Lusty, you begin to wonder if anyone would guess that you just came from a peep show. You danced naked in front of total strangers for the sole purpose of arousing them. Dressed in your jeans and sensible sneakers, though, you don’t look the part.

It’s a little bit sexy to have a secret sorta-stripper alter ego. Sex work can definitely be exciting, both erotically and financially (in a I’m-going-to-take-the-patriarchy’s-money kind of way). On the other hand, sex work is work, and Lusties can get burned out on the demands of patrons and on always playing out someone else’s fantasy. You are fortunate that you can choose whether or not sex work is for you.

Could you do this as a job? Probably not, but your exhibitionistic and narcissistic ego certainly didn’t mind being, um, stroked for a few minutes.

At least you can finally walk in those damn heels.