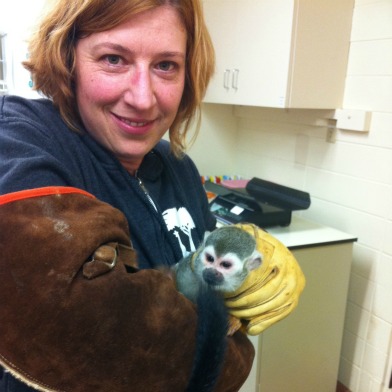 The $5,000 reward for the return of Banana-Sam, the squirrel monkey stolen last week from the San Francisco Zoo and found in Stern Grove on Saturday, is being put on hold until police complete an investigation, a police spokesman said today.

“Before they give a reward to somebody, they want to make sure they have all the facts,” Officer Carlos Manfredi said.

The 17-year-old monkey was reported found around 7:30 p.m.
Saturday.

San Francisco police said a caller told investigators he was walking in Stern Grove when he saw the monkey appear from the bushes. The caller said he was able to coax the monkey into his backpack, and then called authorities.

Even though the person who made the call claimed to have found Banana-Sam, Manfredi said that anyone who reports finding a missing animal is still considered a person of interest.

“It wouldn’t have mattered who turned the monkey in. It’s part of the process,” Manfredi said.

The monkey’s disappearance was widely chronicled by national and international publications as well as by an alter-ego on Twitter, SF_BananaSam.

Banana-Sam was discovered missing Friday from an exhibit that had been breached by vandals, according to zoo officials. The vandals cut a perimeter gate overnight, climbed on top of a roof sheltering five primate exhibits and cut two holes into the mesh of the squirrel monkey exhibit.

Zoo officials did not return calls for comment this morning.